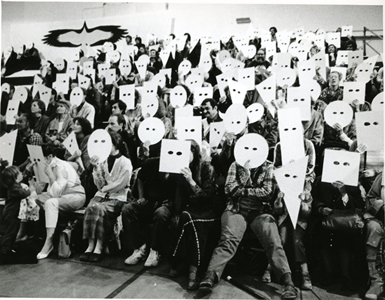 “Anna Halprin: At the Origin of Performance”

An Exhibition at Yerba Buena Center for the Arts

It is no small irony that a recent San Francisco retrospective on the career of Anna Halprin was borrowed from France. Now 87, Halprin has both suffered and enjoyed her outsider status for over half a century. She not only migrated to work in the relative cultural wasteland that was California in the 1950’s, but once there found herself immersed in beatnik culture, tossing off her modern dance roots to pioneer a fusion of theatre, movement and emotional exploration that has influenced every field it has touched without ever being sufficiently credited. Even Jacqueline Caux the French curator for the exhibit at Lyon (which traveled to Halprin’s hometown almost as an afterthought) discovered Halprin inadvertently, during research on American experimental composers, many of whom credited performances with Halprin in the 50, 60,’s San Francisco as groundbreaking.

Halprin’s spirit was and is not only pioneering, but something more akin to indominability. In a recent phone interview, she lamented about suffering a cracked pelvis in a fall, and a bout with pneumonia. “I’ll be out for about three weeks,” she predicted. I asked Halprin to help me process the retrospective. It must have been a little strange to pass through the rooms in Lyon where her entire working life was summarized on walls. “Overwhelming,” she said. To be fair, it was not all two-dimensional by any means. The exhibition included a lot of looping performance footage, as well as listening stations where a visitor might sample videotaped interviews with some of the collaborators who know her work best.

During our interview, Anna talked about much more than the Yerba Buena exhibit. The subject, after all, was her whole life.

I asked how they managed to organize such as thing. She knew exactly what the curator, Caux had done:

“To me, my work has been around erasing boundaries. Like indigenous people, life is an exploration of life itself. “

“My work with cancer people was a reflection of my own experience.” (Halprin’s home-made creative attack against her own colon cancer at 52 lead her to create a mind-body revolution called “Expressive Arts Therapy” )

“I married an architect so my own experience through him of inner and outer space began to inform my work.” (Her husband Lawrence Halprin, the renowned architect, is 91.)

“Finally, my own aging process has lead to my relationship with nature. It’s symbolic, the returning to earth. To accept death, look from the cosmic point-of-view….in life there is fear, there is tragedy, but in the long run, in essence, you are just a part of nature. It is a natural force, to return to the earth.”

“I am not a Martha Graham. I am not a personality. My work is a reflection of the culture, what’s going on . When Allen Ginsburg wrote, “Howl” I was just part of that culture. When the Watts riots happened, I went there immediately after without some original idea. It was what was going on in the world. “

“The dance world totally rejected me. I wanted to move more naturalistically, without the armor of style. How can you move without emotion?

“Dance is the mother of all arts. The whole person.”

I asked Anna if there was anything important the curator had left out of the exhibit.

“They didn’t include anything about my work with the gay community during the AIDS crisis. That was a 20-year-period. Maybe in France they didn’t realize how present AIDS was for us.”

“There was my 25-years of work with children. I taught kids classes, the same group from 3 until high school. I got involved in a community co-op where we would connect the dance classes with their school work. I included children in my performances. I like the shift of scale in bodies, and the purity of movement.” (Halprin’s two daughters, Daria and Rana, performed with their mother regularly).

“It started with Wayne Hazzard (Dancers Group) who was after me to do an environmental workshop in an urban environment. To tell you the truth, the urban environment doesn’t interest me any more, I have no passion for it. I’ve done city dances.”

“I decided to honor Larry (her husband), to create something in one of his environments. Stern Grove, when it is empty, is monumental. It has a feeling of ancient Greek places, out-of-earth, timeless humanity.”

Halprin is scheduled to debut her Stern Grove piece on October 3-5.