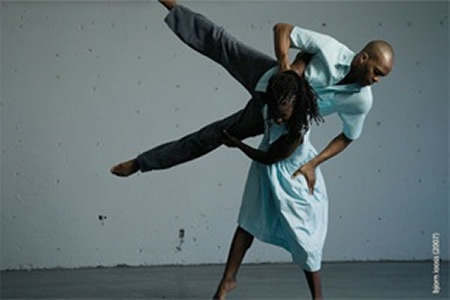 High on the list of out of the ordinary collaboration was the piece “Grace Ideal” choreographed by Vincent Thomas who specializes in multi-dimensional performance art based on dance. “Grace Ideal” opens off stage but within view of the audience with Eric Trudel, a barefoot alto saxophonist playing his original music. When the sax man moves on stage, pretty soon two dancers in suits join him. The dancers light candles at the four corners of the stage. There are recordings of spoken voice pieces, one providing a list of numbers: seventeen, forty-eight, etc. Eventually there is a recitation of Elizabeth Barrett Browning’s poem “How Do I Love Thee?” The pair of dancers bond with each other, sometimes in rolling moves and sometimes by picking up the saxophonist who continues to play undisturbed. After the show this reviewer spoke with Vincent Thomas who said Trudel is strictly a musician who loves improvisation.

The use of costume, in particular men’s suits, provided continuity between most of the work presented in the pre-intermission part of the program. The opening dance “Past Her Rites,” choreographed by Crystal Brown, presented women in suits who, as the work progressed, began to shed the coats and pants. Their red neckties became belts around their blousy shirts. Predominantly incorporating an earthy emphasis of African dance moves that include rhythmic foot stomping that eventually becomes hands slapping the floor, this statement about women (we see them mixing or beating something in a gesture of frantic hospitality and we see them walking on toe as if they have on high heels) also includes moves from swing dance and the practice of yoga. By the end of this dance, one dancer has redressed in her suit. The energy of this piece was palpable and alive despite an ending that fades without memorable conclusion.

The final dance before intermission was “Render and Proceed,” an excerpt from a longer multi-media work in progress entitled “Witness.” Vincent Thomas was both the choreographer and the performer in this piece that featured projected modern day images (advertisements for an IPOD, a photo of George W. Bush, etc.) and a reading of the Preamble to the United States Constitution. The interesting and odd elements of this piece are that the performer scatters newspapers all over the stage in front of a witness who has been selected at random from the audience and then from under the chaotic papers, he finds a red neck tie, a jacket, and suit pants. The performer who is wearing a tribal skirt (maybe it is African?) then proceeds to put these modern clothes on and stuff news papers into the interior of his jacket. The work speaks not only to what the Founding Fathers of the United States meant in terms of what was or is guaranteed to whom (including African slaves brought to America), but it also reflects back to the opening dance “Past Her Rites” where the women in a frenetic world remove their masculine suits to find themselves.

“Isms” (choreographed by INSPIRIT company) concerned the evolution of girls into women. What was performed was an excerpt of a larger work by the same title and had some of the same earthy vitality as “Past Her Rites.” This piece included a live vocalist who began the piece humming until her hum evolved into song on the order of Gospel. The dancers painted a writhing portrait reminiscent of Hieronymus Bosch’s painting The Garden of Earthly Delights. One aspect of this piece was the use of a white board suggesting a classroom setting. Some spoken text like “How do I know if I feel like a woman?” was delivered as well as a listing of isms such as vandalism and racism. It is clearly an ambitious piece that needs to be presented in its entirety before judging its value.

The crown of the evening’s performance was “Day Two,” the collaboration between Crystal Brown and Vincent Thomas. Unusual lifts peppered this work and included Brown lifting Thomas in ways that spoke to the rooted-to-earthness that characterizes Brown’s choreography. Just saying that Brown is strong does not explain what her lifts of Thomas conveyed visually. Another dimension of “Day Two” was a spoken text that invoked the spirit of Langston Hughes. For example Brown says, “The opportunity to breathe is a chance to die.”

Ideals and Ism was remarkable in its lack of ego. Collaboration under the best circumstances is hard to do well but INSPIRIT and VTDance created not only a program of one jewel after another, but a community of harmony in our troubled times.