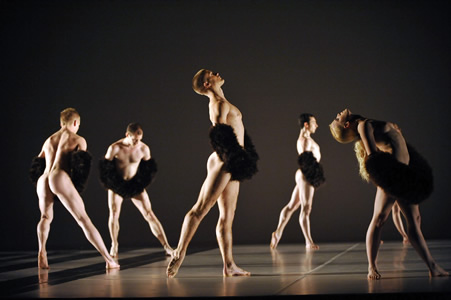 Michael Clark Company made a rare and overdue pass through New York recently at Rose Theater, performing two programs in New Visions: Stravinsky Onstage, part of Lincoln Center’s Great Performers. One program featured two US premieres from 2005: “OO,” mixed repertory to rock and pop, and “O,” to Stravinsky’s Apollo. The four sections of the rep gave a good feel for Clark’s love of high style that shows in all aspects of his work. Onto a stage covered with black and white geometric designs (by Clark with Steven Scott) slowly strode the dancers — carefully pointed feet, leading forward-thrusting pelvis, leading hyper-arched back with trailing, rigid arms. They wore striking unitards (designed by Stevie Stewart with Clark) with composed of black, white and beige panels; or super short white polo shirts, with fitted black caps.

This hypnotic parade’s control and artifice contrasted with Iggy Pop and Wire’s music, followed by… Stephen Sondheim’s “Send in the Clowns,” sung by Streisand. Presumably, “what-the-hell?” is the desired reaction as the the dancers now artfully slow-poked their way onstage draped only in feather boas. A projection of Mona Lisa morphed into a Warhol. The episode drips with – in fact drowns in — irony. The final section shifts back into a good old revolt against such bourgeois notions as clowns, Sondheim, and boas, with trashy looking hobo costumes and full-out dancing to the Sex Pistols.

In contrast, “O” is an unironic take on the iconic Apollo. In the prologue, Kate Coyne – a majestic presence with a gymnast’s flexibility — uses the magic of yoga to metaphorically give birth to Apollo (Simon Williams), who matured in a kind of incubator – a plexi box in which he was upside down as much as on his feet, balancing off the walls which then opened to become a mirrored surface. The muses wore stylish and clever toga abstractions – tunics with abbreviated flaps of pleats front and back. Apollo’s duet with Terpsichore (Melissa Hetherington) was an elegant passage of thoughtful, deep plies, sweeping legs, and clever partnering. The white upstage wall broke into pivoting doors which opened to allow entrances, another beautifully executed detail of many that combined to elevate this production to a higher plane. The upside of the company’s infrequency in the States is that we can appreciate them far more when we finally see them.