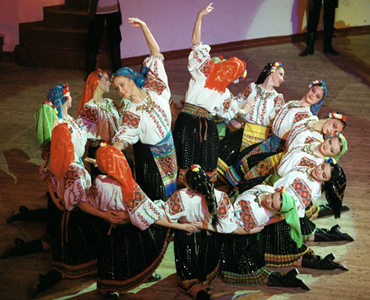 The infectious rhythm and swirling color of “Summer,” the Moiseyev Dance Company’s opening number at Zellerbach Hall in Berkeley earlier this month, typify the exuberance of the troupe. Set to an achingly pastoral (albeit taped) orchestral score, the dance is a fairly nonstop cavalcade of high steps and stomping feet, performed with apparent ease by dozens of disciplined dancers in a tour-de-force display of the company’s signature ballet-based folk style. In short, a showstopper.

That the program begins with a show-stopper is a clue to what lies ahead in the evening’s remaining12 dances, which amount to an effusion of smile-bright faces, Technicolor tunics and skirts and, on occasion, blasts of brilliant technique (particularly in the soloist-based numbers, such as “Kalmuk Dance” with its curious shimmying and Orient-tinged writhing and serpentine hand movements). The show amounts to a kind of charm offensive, one intended to induce gasps and sighs from an audience appreciative of the skill and precision that the 60-plus members of the touring troupe have worked so hard to achieve. They adhere, often doggedly, to a “look” that bears remnants of its origins as a diplomatic export of what the former Soviet Union could achieve on a cultural level.

But as the roster of dances unfolds, the enthusiasm turns pernicious, like a pleasant jig that becomes a tantrum. The permagrins on the dancers’ faces freeze into what look like sneers, and the barrage of squat kicks and concentric roundelays induce eye fatigue. A debilitating sameness sets in, particularly in numbers like “Polyanka,” a heavy-on-the-Russian-folk dance that only underscores the choreographer’s inability to engage us emotionally or intellectually. It’s just a blur of color and movement.

The dancers cannot be faulted, of course, especially in their technique, frenzied as it may at times seem (it’s as if they had been told that a kind of ecstasy can be attained if they just danced harder, faster). All of them appear to be classically trained; most would be at home at any number of professional ballet companies. This is to be expected. Igor Moiseyev (who died last fall at age 101 and is being celebrated in this latest tour with a kitschy, pre-show video documentary) was himself a product of the Bolshoi Ballet and got his early start as a choreographer there.

So it’s not unexpected that the mechanical nature of the works in the second half of the program (notably in “Yablotchko,” a bit of in-the-navy shtick straight from the geometric obsessions of Busby Berkeley) ends with a longer piece, the finale, "Polovetsian Dances" set to Borodin’s music. Although balletic in most of its aspects (the prototype was choreographed by Mikhail Fokine), this version suffers from a heavy-handedness (undulating slaves and leaping warriors) on an often overcrowded stage.

It seems cold-hearted to criticize Moiseyev’s artistry. After all, he took what he saw in the town squares and dance halls of the places he visited and created dances that reconfigured the steps through the medium of ballet. In the process, the entertaining numbers that resulted were rendered as semiprecious artifacts, celebrated by the Communist regime of the time as among the brightest achievement of the state. Today, they seem artificial, cliché-ridden. This is “folk” dancing in name only. Not that they are supposed to represent the real thing, any more than Agnes de Mille’s "Rodeo" represents real cowboys. Like de Mille, Moiseyev rendered folklore theatrical, and that is his genius.

So, let the great masses celebrate this relic of 20th-century socialism. Still, in the the spirit of Soviet leaders past who deplored lengthy forays into “culture,” the evening could lose a segment or three and not suffer. Approached as entertainment and not high art, the one rule of success that applies here is brevity. Otherwise, the length leaves you annoyed rather than entertained.