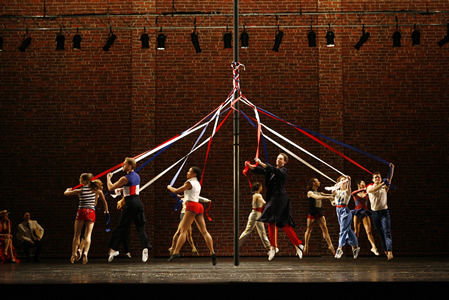 These days, to see Mark Morris’ work, go to the opera. His company doesn’t have a repertory program in New York this spring, but his production of King Arthur was just at New York City Opera. He was at the Metropolitan Opera last year with Orfeo ed Euridice. And his new production of Romeo and Juliet, with Prokofiev’s original score, will premiere this July at Bard’s Summerscape festival.

Fortunately, Morris is blissfully at home in the opera genre, a creative perfectionist whose wishes are smartly heeded. King Arthur’s music was written by Henry Purcell, with libretto by John Dryden. Morris deleted the spoken text because he didn’t like it, which he plainly states in the program, leaving a trim two-hour production. Morris mainly pairs Purcell’s sweet, rhythmic tunes with movement of equal, plain-faced clarity. The steps underscore the melodies and bass lines and lyrics, quite a different purpose than forming the structure as Morris does in his own repertory work.

Part of the choreography’s appeal is its accessibility, almost child-like in its approach. And yet Morris manages to find invention time and again, like pulling gold threads from a haystack. As the 16 dancers build a movement dynamic, such as a cross-stage pageant or a large circle, the repetition sets in the mind so that a rhythmic hiccup or slight change of direction can feel like a bold discovery. Descriptive gestures are repeated like musical themes — a visual shorthand underscoring a thematic or character trait. The seven fine singers, led by Mhairi Lawson, are given some of these gestures, which allow them to blend a bit with the dancers.

But generally, Morris trusts us to make the leap of imagination given the clues he offers, rather than approximating reality. Folk dancing is prominent, as expected and hoped for. In the maypole dance, someone calls out the directions as one might hear at a square dance. It is satisfying to watch the ribbons weaving and unweaving by dint of dancers making patterns – something tangible being produced.

Morris pulls out the stops in the finale, as if to say if it’s a show you want, then a show you’ll get. A huge Austrian curtain descends as some dancers fire off back handspring stage crossings. In a flurry of activity, the many props are set so that the singers form a pyramid, surrounded by dancers doing a fantastic ribbon dance with their lengths of gold. In lieu of fireworks, stagehands fire paper airplanes across stage — a completely fitting and giddy denouement in Morris’ most relaxed and whimsical style.