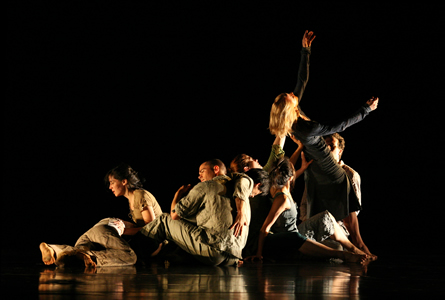 I’m not sure what niche Doug Varone holds in the modern dance world. He is one of the handfull of NEA-supported modern companies, he has won a slew of awards and tours everywhere. He’s young enough to still be dancing but clearly enjoys making big group pieces, judging from the program brought to San Francisco recently. The most striking thing to me was the unabashed romanticism coming from a big, macho, bear of a guy. Highly musical, the combination of soft energy and fluid, gorgeous dancing felt pleasurable on several levels, like watching your boyfriend bawl at the movies.

Varone’s movement is modern dance with neither heavy ballet nor contact improv leanings. Modern was originally about developing new techniques, new ways of moving. Varone succeeds in that regard with strongly designed and wonderfully danced pieces. It is the emotional content, the idea that these dancers are connected to real people, and their lives, which makes Varone’s feel right. His world seems to be about wholeness rather than high art. Not exactly reality, but without the fake beauty that often comes with the goal of danced beauty.

I happen to know that Varone has a long-term male partner, so it was fascinating to watch him play, so convincingly, a straight man in romantic turmoil in the 1988 duet, “Home”, with music by Dick Connette. What began as a portrait of angsty emoting, a post-modern exercise that would be torture to have to watch for more than four minutes, turned into something more graceful and violent. Somehow, Varone managed to leave enough stillness and suggestion in, that you were left with pure emotion, a surprising amount of it.

“Lux” (2006) is apparently one of Varone’s signature works, and again, he deftly manages to flaunt cliché and yet veer straight into the heart of the most usual matters. Varone composed the piece to Philip Glass, “The Light”, which is all lush strings and slow crescendo, and his choreographic uses of unison, of group design, and of overlapping themes and solos, managed to build to an impact that felt like catharsis.

“Entering the rehearsal studio together, we gently close the door and slip feet into foreign shoes. We shuffle across the floor until the soles are soft, worn and familiar.

Our way is collaborative. Frames are created and each participant looks at the invisible picture and adds a color…or stands back to appreciate the absence of color. One after another the paintings are added to the wall and relationship is hunted. Lines are drawn between pictures and the unexpected appears as a dog chasing cows.

The performers are embodied histores hopping between primordial, personal and imagined worlds. Each motion, a tapestry, woven from 7 persons and their uncounted ancestors.

Costumes are buried in the earth. We are wrapped in our beginning and end.

To dance, hold many images in the mind at the same moment. To live, forget it all.”