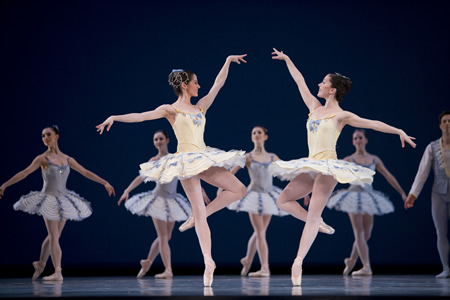 A couple of Balanchine extravaganzas, a chance to see Virgil Thomson music handled by two different choreographers, and a matinee B-cast breakout performance by a young Firebird started off the 2008 San Francisco Ballet season, its 75th.

The two big Balanchine pieces were Divertimento No. 15, a Mozart wonderland, and Diamonds (from Jewels), which is becoming a warhorse for the Balanchine estate, farther and farther from the love paean to Suzanne Farrell it began as, but nevertheless the kind of trove of choreographic interest and pure spatial brilliance that can nearly survive without a rapturous ballerina. Nearly.

Farrell herself provided principal coaching for the leading ballerinas in San Francisco (three dancers alternated in the role), including Sarah Van Patten, at the performance I attended. Van Patten, partnered by the princely Tiit Helimets is new in the role, and beamed with a technically assured performance that seemed to make steps memorable as she did them. Balanchine’s connecting steps and throwaway transitions are more interesting than other choreographer’s entire ballets, but it is up to the dancer to make them simultaneously clear, and through the power of personal investment in non-emotive movement, emotional. Van Patten has a ways to go in that regard. I wonder if Farrell, as coach, even talks about sex with Balanchine.

Virgil Thomson, the American composer and contemporary of Balanchine’s, created operas, wrote songs and piano etudes, wrote about music and worked as a critic. The sounds contained in his work, sampled balletically by a Mark Morris ballet, Drink to Me Only With Thine Eyes (1988) and in the much earlier and more well-known dance, Filling Station (1938), run a sonic gamut from horn-heavy 18th-century symphonic to the vernacular, with Americana ala Copland, and even undertones of 20th Century music’s 12-tone dark side. It was also an opportunity to regard fifty years of choreographic fashion, from the defiant stance of the cartoonish Filling Station, the anti-European pro-American calling-card choreographed by Lew Christensen for the Ballet Caravan, a predecessor of Balanchine’s New York City Ballet to a ballet by a modern dancer, Mark Morris.

Mark Morris took a stab at the 13 Piano Etudes of Thomson, which had never been commercially recorded. Choreographically, this was Morris at his most classical, well-mannered, and boring. The dance was originally set on famous ballet dancers, for an AIDS benefit in the 80’s, and lacks the same grounding and humanity his choreography usually adds to classical music. He may have been experimenting with Classical form, but instead of Morris’ usual way–bare feet stomping rhythms and making something human into dance, he’s clearly trying out the air. Frankly, it was monotonous stuff.

Not as monotonous, however, as 7 for Eight, Helgi Tomasson’s (the Company Director) 2004 piece to Bach concertos for keyboards (piano and harpsichord). In seven sections, he shows off his dancers without creating much in the way of memorable choreography. Tomasson was a dancer for George Balanchine, and his knowledge of technique is clearly impeccable. What he illustrates as a choreographer, however, is too often a dancer’s way of thinking. Yes, dances are a lot of steps—but steps without an exploration, without risk or edge—looks like the kind of functional, perfectly respectable movement through time and space that Tomasson offers. Often tarted up, these days, with innovative costumes and lighting (Sandra Woodall and David Finn, in this case), the work is, unfortunately a rather empty exercise. There is nothing in the way of emotional revelations, any shock of originality, even an image that sears itself into the brain and lingers.

The New York Times sent out their new chief dance critic, Alistair Macauley, a Brit still new to the American scene, to review these, San Francisco’s opening acts—which is in itself a kudo to the company’s international status these deays. However, one of the most dismissive things he had to say about the company, repertoire and dancers (even local heroine Yuan Yuan Tan got slammed) was about the Firebird re-do, choreographed by ex-company principal Yuri Possokhov in 2007.

Macauley complained about the cuts Possokhov made in the original score (Igor Stravinsky) and even criticized the choreography for being too easy. I think Possokhov is a real talent, especially for creating narrative ballets. He is a real story-teller, knows how to create good, old-fashioned theatrical magic, and in his choreography is clearly interested in the new—unlike Tomasson, he explores new ways of expanding classical technique.

Speaking of Firebirds. At a matinee performance, Lily Rogers, a corps dancer, sizzled the stage to create a voracious Firebird. Unfamiliar on center stage, and disguised in the shiny, red mylar wig (straight from the Lusty Lady), she worked it. Rogers is tiny, and will never have the breath-taking, majestic lines of Yuan Yuan Tan, who also appeared in the role this season. Rogers’s bird is more wired, Tan’s is like a statue of a bird, or perhaps an egret that sits in the shallows of the bay, for hours. Rogers’ bird was both more wary and curious than the Tan model. I liked watching her, wired-up and determined to push her way out of the Corps. Ruben Martin and Sarah Van Patten created a lovely Prince and Princess at the matinee, while Garrett Anderson (another corps dancer) played the Kaschei with particular exhuberance. When the B-team hits the stage, they are hungry, hyper, clearly ambitious and exciting. It is exciting, also, to witness this kind of energy. The youngsters are out to seize their moment.