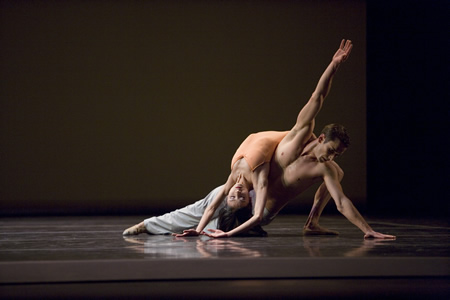 Is it too horrible to admit that I look forward to the opening of the ballet season in order to gawk at the gowns on parade at the gala? The Press isn’t included in the pre-performance dinner (sold out this year at about $1,500/person) but judging from the truckloads of Spanish-style furniture, scenery, flowers and props sitting on the sidewalk on Van Ness outside City Hall afterwards, the pre-show dinner was lavish (the theme was Spanish Splendor). Over in the lobby of the Opera House, however, I found the fashion-watching a little sparse, at least from my vantage point by the free champagne. Still, it’s fun to see the lobby so crowded with (rich) happy campers.

As for the dance being presented to the wealthy and tipsy, overfed elite of San Francisco, it hit all the prerequisites: nothing longer than 10 minutes, lots of star-turns, a bit of old and a hit of new, some sex and sequins. There was “serious” fare on display—moments that would linger in my mind, a couple of “highs” that make affairs like these worthwhile (beyond the fashion show and free bubbley).

Molly Smolen, a new principal most recently with Birmingham Royal Ballet, performed the Frederick Ashton piece, Five Brahms Waltzes in the Manner of Isadora Duncan (first performed in 1976 with Lynn Seymour) in this solo tribute to the pioneer modern dance artist who had many connections in the Bay Area. While there is nothing particularly pyrotechnic about any Duncan dance, in the hands of Smolen, one could see how the lusty, passionate, earthy movements of Duncan might have set the traditional dance world on fire at the turn of the century.

Giselle is one of those spoofable ballets that is so deeply romantic and romanticized, it takes a ballerina of unquestionable seriousness to pull it off. Lorena Feijoo, ordinarily a ‘look-at-me’ kind of dancer, went all the way in her waif portrayal, transforming herself so completely into a pure, demure sylph and out of her usual firey vixen-persona, that she was nearly unrecognizable. Her trembling, anachronistic carriage, the way she set aside her ego, was remarkable. I’ve always found her too full of herself, but here, she earned a new respect from me. Titt Helimets, the company’s new cavalier (tall and blond in a world of shorter, darker Latin and French guys) propped her up well and had the appropriate dignity.

There were a couple of flops, a vanity showcase for Davit Karapetyan that was a quick flashy thing with little substance, and a world premiere by Yuri Possokhov for the soon-to-retire Muriel Maffre that had her vamping all over a gesturing countertenor (Mark Crayton). A pas de deux from Christopher Wheeldon’s After the Rain, to music by Arvo Pärt was stark and stunning, all diagonals and passionate pretzling for Yuan Yuan Tan and Damian Smith. The big bang finale was Balanchine’s Symphony in C, an envigorating exercise to Bizet (the orchestra sounded bold and bright under the baton of Music Director Martin West)—overlapping waves of white-tu tu’s rushing off and on the stage, the joy of classical ballet at its clean, joyous, challenging best.

Trisha Brown blew me away in the 70’s, when I first encountered her work. The technique was this flouncey, “release” thing—a modern dance invention that was non-balletic, much less stork-like and mechanical than the Cunningham style and not at all dramatic and gut-wrenching, like Graham. She was one of those 60’s Judson Church people—experimentalists who threw technique out and made pedestrian movement the new chic. Brown’s stuff didn’t look pedestrian at all, however, it was relaxed, delicious to watch, but at the same time highly complex in its means of moving through space and adding up to almost unintelligible phrases.

That was 30-something years ago. Since then, she has begun to direct operas, gotten into jazz and classical music, and continued to collaborate with scenic artists and composers of reknown (Robert Rauschenberg, Laurie Anderson, Terry Winters, Dave Douglas). Inevitably the movement vocabulary has also shifted, and for me, anyway, the news is not good. In a trio of recent works on display in Berkeley, how long does the subject linger on the edge of the volume (2005), Geometry of Quiet (2002) and I love my robots (2007), dancers shared the stage with computer-generated images, sails, and remotely-controlled flag-poles on wheels (the robots), but these were distractions from the fact that the dances themselves were much more soldier-jointed, spatially circumscribed, and monotonous. It was kind of a yawn.

Richard Alston is written about as one of the leading contemporary dance artists in the UK. That may be a bit of hype, but the company’s first-ever Bay Area engagement showed a mid-career choreographer confident in his musicality, comfortable with group dynamics, and a little less-than-brilliant in the ways of movement. Like San Francisco’s ODC-Dance, or, in some ways, the work of Paul Taylor, the pieces are dancey and social, the use of music and lighting suitably theatrical, and the dancers themselves strong and personable. This is a long-way from the trendier Euro-dance-theatre works being trotted out to audiences in the urban capitals of America these days as if to say, ‘dancey is dead’. Alston still believes in movement.

Judging from three works chosen to tour the country, Red Run (1998) with a musical score by Heiner Goebblels that is reminiscent of a movie soundtrack, Volumina (2005) to some head-splittingly loud modernist organ pieces by György Ligeti (Harmonies, Coulée, Volumina) and, most refreshingly, The Devil in the Detail (2006) to rags by Scott Joplin accompanied live by pianist Jason Ridgway, Alston has less a signature style, than the way of a chameleon, adapting to the circumstances music and inspiration set-up for him. The most memorable moments occurred in the Ligeti piece when trios of dancers battled their way across the stage on diagonals, and throughout Joplin, where perkiness and playful musicality created pleasing renditions of the familiar melodies. The dancers were remarkably confident throughout with the technical demands of Graham-like floor-work, Cunningham-style contortions, and Taylor-like lyricism. They are a pleasant bunch, good export material, a little bland for New York perhaps, but winning in the provinces.