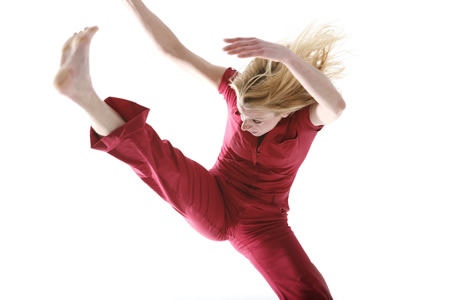 Hin und zerück (There and Back)

then reverses. I was reminded of the opera because many of the artists

in the Danceground Keriac benefit perform in Berlin, where Hindemith’s

opera was given, but also because the evening included work explored in

the past, re-explored for the present and included a retrospective

video on Keriac, the woman whose studio was home to the evening’s

offered the most accomplished work, a side-by-side duet to two songs;

"Ave Maria" sung by Callas and "Blue Velvet," a number by

Bobby Vinton. Although neither left his or her place, each executed

selected gesture/movement that implied a range of emotion from satire

to pain, though each viewer might decide those differently. Dressed in

changing their downstage focus. These two comment on performance

long absence from the SF scene. In her wonderfully relaxed "fling and

fall" style, she wound up on the floor a lot, noting in her remarks to

the house. "I seem to wind up on the floor." The musician Albert

Mathias played some sort of electronic drumset which set off

Hermsesdorf’s explosive moves. Her long loping moves are great to

Scott Wells has inherited the 1805 Divisidero studio from Keriac, a

dancer who was there for some twenty years, teaching contact

improvisation and offering solo dances and a special dance philosophy,

that is, "dance is a flame burning in their (dancers) core." The video

collage, by Lindsey Gouthier, showed Keriac in many moods, most notably

in the role of a ‘cancer dancer’, the dancer effected by disease. Scott

and his dancers continued next after the video showing, demonstrating

Wells’ particularly relaxed easy style of ‘contact’ as he conversed

with Steve Bearman about Keriac and his work. Wells’ dancers were Ray

Nita Litte, formerly of the once famous Re-union Group and the

characterized by careful watch and response moves. Each dancer had a

particular style of moving and provided some surprises. That group

For this reviewer, contact improvisation has great limits; although fun

to do with its balances, leans and release, the tendency is always

down into gravity (preceding often by lifts) and thus the dynamic