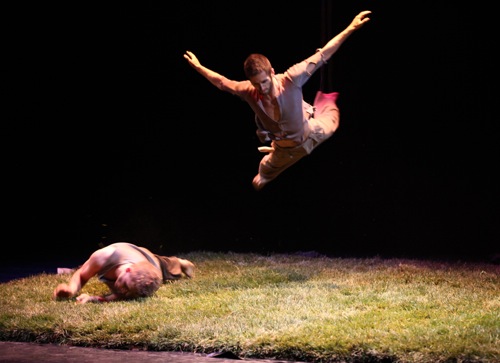 Rolling in Their Graves

Choreographer-dancer Brian Sanders has enjoyed a cultish following at Philly Fringe for both his irreverence in such high-concept shows as “Plastico Patio,” “Sanctuary,” and “Urban Scuba.” He likes to mount things in just the right space, wherever that may be. Currently, his game nine-member troupe, JUNK, already has a huge hit with people returning even the first weekend to experience the macabre movement poetry of “Dancing Dead.” Sanders ingeniously uses the sub-basement of a Northern Liberties loft complete with ghoulish entrance and mausoleum columns around which a burial ground of dirt and stone is conjured.

The columns are scaled by the zombies in residence, where at one point his ensemble creates an ethereal sculpture of flesh. This segment, which brought tears to many, was scored to the dirge-y Carly Simon tune “That’s the Way I Always Heard It Should Be.”

In fact the soundtrack is an arch 1970s mix of the beloved and kitsch, from Babs’ “Evergreen” to “Bridge Over Troubled Waters” to “Love Will Keep Us Together,” which has the troupe in disco-corpus hustles, then crumpling on the crypt steps obviously celebrating the night disco died.

Sanders cast himself as the gravedigger, a dancer who hoists corpses out of the dirt and arranges them around the graveyard. Rosencrantz and Guildenstern have nothing, metaphysically, on him, as he dons open toe roller skates and dances with a skeleton. His dancers, twisted in grotesque post-mortem shapes, are at times not visibly breathing. They are suddenly tumbling through the air on raggy cords—it is a shared dream and nightmare. Loved that desiccating waltz to “You Fill Up My Senses” by John Denver that devolves into primal morbidities.