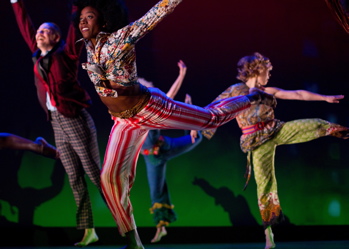 In honor of its 40th anniversary, NCSU Center Stage presented David Dorfman Dance’s “Prophets of Funk” at the Stewart Theatre. Paired with Sly and the Family Stone’s era-defining music, the upbeat, evening-length dance performance celebrated the 1960s and ‘70s in grand fashion. Highly physical movement, clear relationships between dancers and audience participation blended seamlessly to create a cultural and political portrait of an era where funk was the gospel and life was groovy. By the end of the night, Dorfman and his company had the audience singing and dancing in their seats… and onstage, too.

Between the density of the work’s choreography and its brightly patterned costumes, “Prophets of Funk” was a visual feast to say the least. High kicks, spiraling turns and innovative partnering were performed with abandon throughout the work, and they often occurred simultaneously on different parts of the stage. Hip bumps, head isolations and locking vocabulary were also included in the choreography, creating frequent ties to a funkier time.

Dorfman’s company of eight included two black men, two white men, two black women and two white women; Dorfman used interracial groupings and partnering sequences throughout the work to illustrate the race issues that permeated the 1960s and ‘70s, and he did so in an understated way. The simple but powerful lyrics of “Don’t Call Me Nigger, Whitey” echoed through the theater as male company members created a moving tableau of shifting power and racial equality. Later in the work, company members sequentially replaced one another in an intimate pose downstage, creating couples of mixed race, of the same race, and then back again. Sections like this, in addition to butt slaps, body rolls and generally flirtatious body language between company members played off of the sexual exploration and freedom that also characterized the dawn of funk.

Throughout the evening, Dorfman’s dancers sang, spoke and moved with 100 percent commitment; the dancers’ undying energy and good vibes saturated the theater, making it impossible for audience members not to find the groove in their own bodies. And Dorfman choreographed the piece accordingly.

Dancer Timothy Edwards got the audience giggling in a section of dance instruction; Edwards asked his fellows to demonstrate their favorite dance moves, and then gave them decade-appropriate names like “The Purgatory Push” and “The Whipping Post.” Edwards also explained his personal dance move, “The Man,” so titled because he “just stands still.”

In another section, soloist Whitney Tucker, who had been previously clad in a blonde afro and a blue pantsuit, removed her wig to deliver a monologue about prophecy; the rhythm and dynamics of Tucker’s speech mirrored the subsequent intensity of her chest pops, hip gyrations and open-chested descent into the floor.

In the work’s second-to-last section, dancer Raja Kelly led audience members, already on their feet, in a call and response of “I Want to Take You Higher.” This transitioned into the company bows – which, I must note, was a tricky way to get a guaranteed standing ovation (albeit well-deserved)— and a dance party onstage. Audience members were all-too-eager to participate in a pre-taught line dance and a Soul Train line, in addition to performing their own freestyle moves for everyone to see.

It is difficult to say where exactly “Prophets of Funk” peaked, because it was exhilarating from start to finish. David Dorfman and his company performed with a huge amount of heart — and obviously, with an enviable amount of soul.