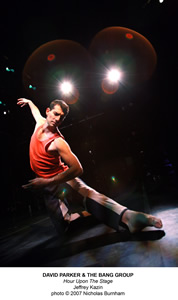 The title of David Parker and The Bang Group’s new work, “Hour Upon the Stage,” is truth in advertising. It is both plainspoken and poetic, which might summarize Parker’s approach to dance as well. In this world without speech, Parker affectionately explores the myriad communicative possibilities of physical expression. Rather than talking to one another, his dancers move. Basic exchanges take shape, and make noise, as foot strikes, thudding runs, violent falls to the floor. Conversations are carried on through soft shoe riffs, sometimes responsorial, other times in tandem. Ballet might be poetry’s equivalent—a rewarding, if acquired, taste, with undeniably pompous overtones.

As in social situations, human sentiments arise in “Hour,” but usually in humorous ways—impatience, competitiveness, pride, narcissism. Two men are so symbiotic that the standing Nic Petry doesn’t even notice when Jeffrey Kazin suddenly leaps up and clings to his chest. A few songs remind us of the pleasures of music, missed and newly extravagant-seeming after long spans of slaps, thumps, and silence. The eight dancers, all different body types in deconstructed jeans and gem-colored tops (by Melanie Rozema) were bathed in pools of light, which shifted to beautiful moonlit washes, a moon projection, and white cross-stage shafts (by Kathy Kaufmann).

Parker paced the work wonderfully, each of its many episodes just long enough. One of the final scenes featured a group moving in clockwork precision, frantically flinging limbs, supporting one another, circling in and out, and creating what must have been hundreds of near-miss slaps and falls. They collapsed in exhaustion, and inched toward the bare upstage wall until Kazin leapt to his feet, darting up the house stairs and out the door, slamming it as the lights extinguished—pre-verbal, eloquent punctuation on the finale.