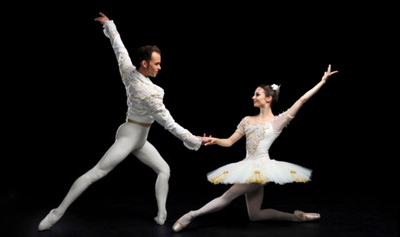 He’s not your high school Spanish teacher’s Don. The avuncular old knight who is the title character of Gorsky and Petipa’s 1869 “Don Quixote” is more bemused dreamer than madman out to save the world. Actually, he is more of a plot device than anything else. The tale of the pert young Kitri who hoodwinks her father into letting her marry the town barber might not have sold on its own. The presence of an esteemed literary hero lends it cachet. But, in truth, the Knight of the Woeful Countenance doesn’t do much except help Kitri’s father chase after her and sit around smiling benignly while other people dance. And his tilt at the windmill is woefully truncated.

But this is ballet, folks, and the dancing is pretty nifty. The original choreography has been augmented by SF Ballet Artistic Director Helgi Tomasson and choreographer-in-residence Yuri Possokhov, and the costumes by Martin Pakledinaz (who also did the scenic design) are purely glorious. Of course, there’s still the matter of Ludwig Minkus’ third-rate faux-Spanish score, but that comes with the territory and, like everything else in this long evening of dance, seems to improve as it goes along.

It begins with a brief prologue, in which the Don (a lovable Jim Sohm), inspired by reading the romances of old, decides to take up a life of knight errantry, accompanied by his oaf of a valet Sancho Panza (Pascal Molat, who deserves better). It is entirely in mime. Then we are transported to a square in Barcelona where the guys all strum guitars and the girls flutter fans, having nothing better to do all day. After a few introductory dances by the townsfolk, Kitri (the quicksilver Maria Kochetkova) enters, accompanied by the love of her life Basilio, the town barber (a high-leaping but rather stiff Taras Domitro). They beg for her father’s blessing, but he has someone else in mind for his daughter, the rich fop Gamache (Myles Thatcher, who bumbles around in purple satin and lace for the entire ballet and is the most annoying thing in it — not his fault, it’s the hand he was dealt).

Enter the Don and Sancho on a real (and well-behaved) horse and mule, respectively, and, after lots of dancing, dominated by Ricardo Bustamante, Sara Van Patten and Pierre-François Vilanoba as friends of the would-be-bride, Kitri and Basilio escape into the wild. Actually a gypsy camp where the musical mode turns Hungarian for a sexy, sultry interlude by Hansuke Yamamoto and Danielle Santos and a gorgeous adagio for Kotchetkova and Domitro. All is well till the search party shows up and the Don, Sancho, Kitri’s papa and goofy Gamache must be distracted by a puppet show while the lovers flee. Then there is the brief thing with the windmill, conveniently located at the back of the stage, and the exhausted Don falls into a deep sleep.

And this is the best part of the show. Quixote’s dream takes place in a sylvan fantasy world where the stately Sofiane Sylve stands in for his lady love, Dulcinea, and sprightly Clara Blanco cavorts as Cupid. With a female corps of Driads and a bunch of little Cupids from the San Francisco Ballet School, it is a delight. Even the music turns lyrical.

Then the chase is back on, this time to a taverna where the lovers are caught but fake a ruse to force Kitri’s father to consent to their marriage. With the blessing and persuasion of the Don he agrees, but not before Van Patten, Bustamante and the corps execute some hot flamenco moves.

“Kitri’s Wedding,” the final act of “Don Quixote,” is the most familiar to balletomanes, often extrapolated, especially for its bravura pas de deux for the wedding couple, which has some of the flashiest dancing and, for my money, the worst music in the whole thing. Nevertheless, it’s a joyous conclusion to the evening’s proceedings. But, as the Don rides off into the sunset to seek further adventures, one can’t help wondering why he was there in the first place.

(9738)
$6.94 (as of January 26, 2021 - More infoProduct prices and availability are accurate as of the date/time indicated and are subject to change. Any price and availability information displayed on [relevant Amazon Site(s), as applicable] at the time of purchase will apply to the purchase of this product.)

(22204)
$17.89 (as of January 26, 2021 - More infoProduct prices and availability are accurate as of the date/time indicated and are subject to change. Any price and availability information displayed on [relevant Amazon Site(s), as applicable] at the time of purchase will apply to the purchase of this product.)

(27676)
$0.75 (as of January 26, 2021 - More infoProduct prices and availability are accurate as of the date/time indicated and are subject to change. Any price and availability information displayed on [relevant Amazon Site(s), as applicable] at the time of purchase will apply to the purchase of this product.)
related posts