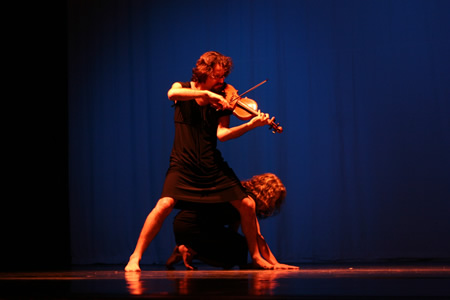 An orange tabby cat-in-residence was hanging-out center-stage before a recent performance of Dandelion Dancetheater’s new work, “Drop” at CELLspace, in the Mission District, San Francisco. George Balanchine (the ballet God) used to throw his cats across the room, just to watch how softly they landed. This cat had nothing that spectacular to do. She just lay there, languidly surveying the arriving audience, as comfortable as only an animal can be. Within a matter of minutes, all hell broke loose, and the cat made a quick, instinctive exit. I missed the cat. I kept thinking about the contrast between the “performance” vs. cat-sit. “Drop” was intriguing, experimental, well thought-out, studiously chaotic and ambitiously searching. But the cat….was a hell of a cat. Consciousness can be such a terrible burden.

Eric Kupers, who directed and choreographed the piece, in his customary collaborative manner, is offering-up a new work with nary an exposed body part. Nakedness has been the company’s stock-in-trade for the last few years; nakedness in a tribal/cathartic way, with an emphasis on diversity of sizes, shapes and ages of participants. In “Drop” he has not exactly stepped out of sexual politics and back into the realm of modern dance, but the deliberate choice of more technically proficient performers plus the absence of nudity, creates a certain tension. What in the world is Kupers up to now?

The more I grow as an artist, the less I want my work to be ‘about’ something,” he writes in the program notes. Is it a fair question to ask, then, what is he trying to communicate in “Drop”? In the barn-like industrial space where the company created and performed the piece, dance is still secondary to the narrative collage Kupers creates, employing more singing, rhythmic propensity (think “Stomp” on a budget) and for the first time, real singing. Kupers plays the MC throughout, although his “announcements” are just as likely to be whispered monologues having something to do with directorial input, as if he has developed a practice of talking to his performers while they rehearse, and decided to leave it in. This is interesting, another experiment, and, in Kupers’ hand, another chance to keep things light. He has never been one to take himself too seriously, which, of course, is why people are paying attention. The man is developing a theatrical voice although he is still young and green enough to avoid anything pat, to push away from anything‘Dandelionesque’., If anything is beginning to seem “Dandelionesque”, (like nudity) he is here to say, ‘lose it’. That’s a very good thing.

“Drop” presents a striking cast of performers. Mantra Plonsey, a powerhouse of talent. More singing actor than dancer, her style of punkish diva adds the right dimension to what Kupers seems to be creating here, a theatrical world involving “the ultimate absence of any lasting, solid self.” Where the dancing ensemble strongly embodies comfort-free zone, the life that keeps pulling the rug out from under you, Plonsey lives, breathes, speaks, looks, dances and sings it. She deserves her own show.

Julie Kane, the wild-haired goddess from the legendary local company, “Contraband”, defunct 12 years now, not only offers wise movement, a kind-of ultrawoman essence to the group, but also exists on stage as a symbolic offering—she comes from a different generation of dancers, of politics and aspirations and art, and yet she is here, dancing for Eric Kupers, saying, ‘yes’. Like Plonsey, she fills a space with something intrinsically powerful, call it experience, or, simply, the brilliance of a born performer.

Under Kuper’s direction, however, everyone has their moment. Anne-Lise Reusswig shows some amazing technical dancing—the kind of thrown-away movement that is much harder than it looks. David Ryther somehow manages to dance while playing the violin, beautifully. Debby Kajiyama, Julie Brown, David Ryther, Stacz Sadowski and Kupers himself, all add texture, commitment and quirky expression to the piece.

Kupers is no longer an upstart. “Drop” seems more like a suggestion of future direction than the ultimate arrival of a major artist—but just as well—loft-dancing is supposed to be about this process. San Francisco is San Francisco because of it. The West Coast is a setting where politics and art, sex, Buddhism, body-image, music and anger can be wrangled into a couple hours of performance without anyone blinking an eye. Here, Kupers dances with his pants around his knees, in garter-belt and satin brassiere. How horrible can life be?