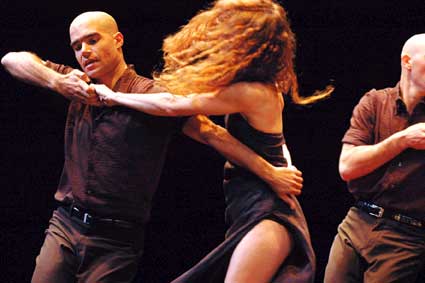 Everyone&#146;s favorite ritual sacrifice ballet, Rite of Spring, has been turned into a sleek and intimate modern dance by Israeli choreographer Emanuel Gat. Tackling Le Sacre du Printemps is a little like climbing Mount Everest for a choreographer. Dozens of attempts have been made since the original Stravinsky/Nijinsky version, which revolutionized both music and dance in 1913. Gat seems undaunted or perhaps incited by all this.

Gat meets the bombast of Stravinsky&#146;s score the same way that he meets the quieter, more minimalist sections– with a torrent of movement that starts in a ballroom daisy-chain, but eventually spills onto the shadowy, outer spaces, getting wilder. And always, the ticking bomb, the certainty of the ending, looms. Every moment that one of the three female dancers is left unpartnered is a moment of risk. Not dancing is danger.

Things do get primal, but Gat&#146;s use of violence is understated. The salsa theme means that every whiplash turn that takes a woman flying comes right back in against the man. The choreographer himself appears in the work, lending a slightly sinister air, with his shaved head and intense gaze, while the other male, Roy Assaf, stays more neutral. The women, Shanny Ben-Haim, Avital Manu and Maya Briner, may drape their hair and lean into their partners, but the blankness on their faces signals they know exactly what is up.

Winter Voyage, a duet for two men which opened the program, used the darkly romantic music of Franz Schubert (his song-cycle, Winterreise was uncredited in the program) to explore the dynamics of an intimate relationship. Unisons seemed almost uncanny between the two dancers, Gat and Assaf, but what lingers is the punctuation between bouts of gestural, vigorous dancing. The soul of the piece resided in moments of stillness. Here, hidden in the underbelly, there was rest, softness, and emotion.