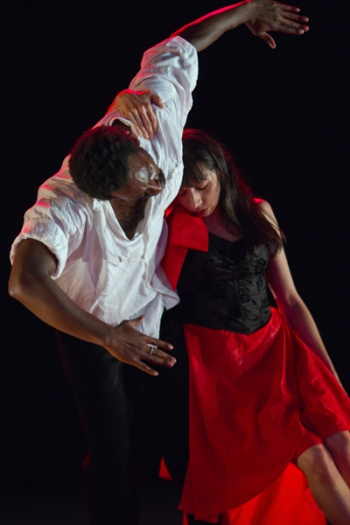 With “Home Season 2011,” Kim Epifano, director of Epiphany Productions, seems to be producing her very own Ethnic Dance Festival. Epifano works with the support of Refugee Transitions, an organization that serves refugees who have been forced to flee their home countries due to war or persecution. Musicians and dancers from Bhutan, Burma, Liberia and Nepal appeared in this performance. There were inspiration and images from Ethiopia as well.

Remy Charlip, a well-known Bay Area artist, created “airmail dances” when he could not travel and teach. “Alonesome/Twosome,” danced by Christine Bonansea and Antoine Hunter, was given to Epifano by Charlip. It is a wonderful series of hide-and-seek playful games and well as “I dare you to?” episodes. Bonansea is small and very skilled. Hunter is tall and powerful. Together, using signing (Charlip knew hand gestures for the deaf), lifts, extensive locomotion, attacks and embraces (as well as words), they presented an exciting duet, a challenging opening number. Dancers in the audience were ecstatic watching Bonansea’s feet. Remarkable feet and feats!

In Epifano’s many travels, she teaches, photographs, and films dances. “Solo lo Que Fue” (“Just a Moment”) was filmed at Cantina El Norteño in Mexicali, Mexico. Nine men and women accompanied by two musicians and singer Aida Corral, dance in the narrow space in front of the bar. There are solos, group numbers and one “on the bar” event. The piece combined Mexican folk elements with Epifano’s post-modern moves. A good time was had by all.

A series of musical interludes followed the film. A song created in Ethiopia, “Following the Birds” (written by Epifano and sung by her with Stephen Kent and Sally Davis), was followed by a charming song and dance presentation by two girls from Nepal. Then we heard the “Boys Band of Burma” with two offerings and another film, “Liberation Next Generation,” in which young people from Liberia spoke and danced in an Oakland playground, relating their wishes to be educated in the United States and to return home. All of the international participants were sponsored by the EPSDT Mentorship Program with Refugee Transitions.

The major work of the evening was “Heelomali” (“Unique” in Amharic). Created by Epifano with input from the dancers, “Heelomali” was inspired by the discovery of Lucy’s bones by the Afar people of the Rift Valley, excavated November 24, 1974. Ara Glenn Johanson, a powerful singer, speaker and dancer, gave us the thematic information. “I am not a gorilla, nor am I human. I am unique.” The four dancers—Johanson, Janine Trinidad, Christine Bonansea and Laura Elaine Ellis—proceeded to demonstrate various stages of evolution combining ape-like gestures with lyric dance, in solos, duets and foursome ensemble. They used props from stones to shawls, a boom box and blankets, large locomotion moves and many hand and facial gestures. The work was enchanting, but sometimes all over the space, thereby hard to focus on—and went on too long. Excellent accompaniment, songs and poetics were provided by Su Wai, Stephen Kent, Kim Epifano and Sally Davis.

The lighting for the production was by Tony Shayne, visual design and costumes by Epifano (mistress of many forms). Videography was by Gladys Kawan Liu. Epifano can certainly bring the world to San Francisco.