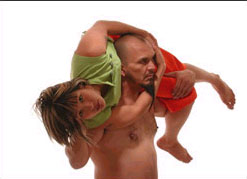 In the spirit of the Mission District of San Francisco, where young artists still hang-out, work on each other&#146;s projects and make no money, Erika Shuch has created a new dance/theatre piece, All You Need, that gets at a very disturbing subject matter with the lightness of pop music, with which it is filled.

The central story, in a piece made up of layers both obvious and not, is that of the recent case of Yuppy cannibalism in Germany, where the devourer ran an ad and considered 300 applicants before, in fact, finally killing and eating one. Shuch barely touches on the horror of the incident, creating a love story instead, where the idea of no-holds-barred intimacy is all-consuming, so to speak.

The cast of dancers sing and talk, which is a good thing, since the stage at Intersection for the Arts, a Mission District "alternative art space" is about as big as a kitchen. What dancing there is often has to do with two people having a power exchange, not the final act of some sadist. What charms in All You Need (title alluding to a partially named Beatles song) is the seamless way that Shuch has developed such an unlikely idea. Truly original, the entertaining musical score and stark poetry of its minimal text, and the warts-and-all intimacy with its four young performers creates a very tight piece.

This is contemporary, TV-reality-show kind of theatre, a voyeuristic musical, pop performance with a few ideas. The cleaver "installation", the props and video used, were by Sean Riley. Fabulous singing (especially on the punk rock version of the Patsy Cline song, "Crazy") were offered by Dwayne Calizo and his band, as well as the whole cast, Jennifer Chien, Melanie Elms, Jesse Howell, victoria mcnichol kelly, and Rowena Richie.