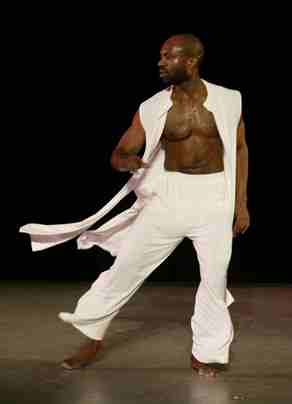 Ronald K. Brown choreographs regularly for the African-American dance machine, Alvin Ailey American Dance Theater, but an evening in the presence of the man&#146;s own dance company, Evidence, is another story altogether. While Ailey has to fill huge theaters and is therefore stuck with the presentation of mostly upbeat crowd-pleasers, Brown is touring the country on the "art" circuit and has the freedom to make his own kind of work. The results are dances that pulse with originality, idiosyncratic dancing, and, best of all, ideas.

Brown&#146;s background includes traditional modern dance training, and that clearly informs his use of moody lighting schemes and mish-mash musical scores that jump from Terry Riley to Bob Marley, Nina Simone to Fela Anikulapo Kuti. However, it was obviously the choreographer&#146;s sojourn in Senegal and the Ivory Coast that transformed what might be strictly post-modern, African-American "art" into a movement treasure chest. The spiritual and community-centered focus to the work is African, as is much of the actual dancing, from the grounded, arms-akimbo movements, to the partnerless phrasing and line-up spacing. Yet the way Brown does African includes pirouettes and club dance moves, complex phrases and much more use of theatrical space than the traditional form. He seems to have created his own form.

A recent performance included three dances, "Grace" (1999), "Come Ye" (2003) and "Order My Steps" (2005), each a full-company work pulsing with solos, lines of seemingly impossible unisons and dancing that exemplified this African/trance/modern thing. Not afraid to mess with pop influences, not one particularly concerned with pencil-thin bodies or perfectly articulated feet, the predominant aesthetic here has to do with reality&#151;-these people look like African-Americans you might know, work with or see walking down the street (there is one man who looks to be of Latin descent), not some super-human dancer species. In Africa, everybody dances.

Program notes for "Order My Steps" hint at ideas of ambition, confidence and life path. What it looks like is a dance with spiritual intensity and really good music. Here, a central section to Terry Riley music (played by the Kronos Quartet) looked more modern-dancey than anything else on the program, especially with a lack of discernible rhythm, something that dominates practically every other moment on the stage throughout the evening, whatever the musical selection. Every dancer has a personal style, and each is given an opportunity to go off in a direction of barely bridled ecstasy. The movement is the spirituality, and the dancers, adept at the intricacies of the Brown vocabulary, go with it, all the way.

"Come Ye" uses a film collage by Robert Penn and politically themed music by Simone and Kuti to carry things in a more difficult direction. Here, the joyful music portrays a call to prayer, although the denim-clad dancers seem to be coming from or going to work&#151;maybe it&#146;s that&#146;s part of the point.

"Grace", another God-oriented work, seemed the least dynamic of the three, perhaps because it is an older piece. Brown visited Africa in the 90&#146;s and has apparently been working out this movement vocabulary since. Also, "Grace" was originally choreographed for the Alvin Ailey company. A kitchy upstage entrance for a single female in white robing seems a little much, as does the costuming in devil red or angel white. The dancing has interesting earthiness, however, good music (by Duke Ellington, Roy Davis Jr., and Fela Anikulapo Kuti) and seemingly simplistic staging (line-dances, call-and-response, and group huddles) that add up to something unique.