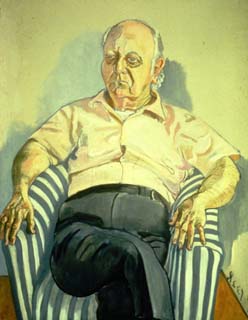 Thomson, and the Mainstreaming of

Cal Performances opened its season with the Mark Morris Dance Group performing the unusual double bill of Four Saints in Three Acts and Dido and �neas. Four Saints received its first performance in Morris’ version on June 28, 2000 at London&#146;s Coliseum. The Berkeley performance on September 21 was the American premiere.

Four Saints was conceived in 1927 by composer Virgil Thomson and author Gertrude Stein. Thompson wrote: "Naturally, the theme had to be one that interested us both. &#145;Something from the lives of the saints&#146; was my proposal; that it should take place in Spain was hers. She then chose (and I agreed) two Spanish saints, Teresa of Avila and Ignatius Loyla. The fact that these two, historically, never knew each other did not seem to either of us an inconvenience."

That their collaboration had no conventional plot didn&#146;t inconvenience them, either. Stein produced a libretto and gave it to Thomson with the instructions "Do anything with this you like; cut, repeat, as composers have always done; make it work on stage." A semblance of a plot was created by Maurice Grosser after Thomson and Stein had finished their work in order to give choreographer/stager Frederick Ashton some guidance. According to Grosser, Stein was pleased with the scenario and said, "Maurice understands my writing."

The choice of Ashton, then just beginning to make his mark as a choreographer, was curious. He went on to become England&#146;s greatest choreographer of the twentieth century. Little of his early work survives; the ballet Fa�ade (Dame Edith Sitwell&#146;s poems set to music by William Walton) probably provides the best clue to his early style. He was obsessed with fashion (the subject of his first choreographic success) and concerned with celebrity. Stein was convinced of her own celebrity and importance, so in this regard Ashton was appropriate. The cast for the first presentations in 1934 was all black, another unusual choice.

Mark Morris has staged not the full "opera" but rather a 55-minute abridgement made by the composer. This was a wise choice. The audience loses nothing in understanding or pleasure by seeing the shorter version. Quite the opposite: the work&#146;s appeal is more concise and more readily appreciated. Thomson&#146;s music revels in hymn-like tunes and is largely monochromatic. Stein&#146;s text is an example of her musical way with words and repetitions. Morris draws upon his folk dance training to shape steps and move groups of dancers, beguiling with simple dances that respond to the text, not unlike the way he usually responds to music. (The cast consists of six couples plus two dancers who portray the two saints selected by Stein.) Morris’ setting of the Act I "chain" chorus ("No one chain is it not chain is it, chained to not to life chained to not to snow chained to chained to go and and gone.") was a beautiful example of his musical instincts working with words. The dancers and musicians performed with a happy ease.

Morris&#146; Four Saints is a sunny experience, furthered by the colorful designs of Maira Kalman, whose palette and symbols are reminiscent of Matisse. For those more attuned to the subtlety of Stein&#146;s writing, there are probably spiritual elements to be appreciated as well. It is difficult, however, not to escape the feeling that if Four Saints had not been created by Stein, it would by now be forgotten. Yes, it can be seen as a Dadaist creation. The non-connection of libretto and score reflect the aleatoric aesthetic championed much later by Cunningham and Cage. In these respects, the work is strongly in the avant garde tradition. Is it great art? That’s an open question, but it is certainly fun to watch.