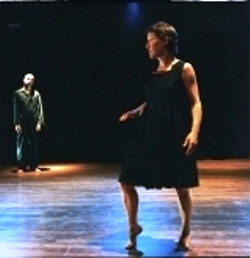 Christy Funsch’s experiment in showing solo dances to one audience member at a time is daring and delightful. I was able to see two solos on March 9 and one on March 11, performed for me alone. The dancer’s energy changes between these moments and, then, during the performance; we are challenged to see how and why. We all, critics or not, need to learn to really see dance.

Funsch’s vocabulary moves between large lyrical or expansive movements and, toward and away from the body, with small gestures that often touch the torso or the face. In my imagination, I have named the process “in and out,” because these extreme changes echo thoughtful and emotional states, uncertain but provocative.

There were seven events on March 9 (one was a duet) and eight on March 11. Because most are short, it would be fascinating to tie them together and find an order that proceeds from one to another, thereby linking the material into a dramatic whole. Perhaps that will come next.

All the performances are noteworthy. I will deal with some I found outstanding and list those that are good and praiseworthy, since it is difficult to absorb all that one experiences in such programs.

“Three Rue Road” is a duet Funsch performs with Nol Simonse. It is almost three solos: the third was made for Stephen Pelton and done at Counterpulse. Although there is little interaction, these two dancers absorb and employ each other’s dynamic quality and design. Funsch’s solo on the March 9 program was “HammerHorse,” a premiere to music by U2 and Fado Hilario. The piece is in two parts: the second resonates with a sense of “horsiness’; the first part is meditative with gestures that encircle the eyes. On March 11, Funsch started the program with “Slip,” a work from 1997.

I was intrigued by “White Girls for Black Power” danced by Phoenicia Pettyjohn. She kept her back to the audience but her large sweeping movement kept us focused. Fredricka Keefer’s easy range and flexibility in “Salty Dog” was exciting, as was the duet by Jennifer A. Minore and Glenn Curtis. Theirs was the challenge of dancing together at the same time, in the same space, but without contact. It was fun to hear the Mills Brothers sing “Nevertheless” while Sarah Sass danced “Daisy.” Altogether, a set of dances with great charm.

The program on March 11 seemed to bring together dancers who were given more challenging works. I was delighted to see the accomplishment of Chad Dawson, both in technique and acting projection, in “To Mifune” (2007). He was smart, skilled and funny. Laura Elaine Ellis was glorious in her strength and balance in “Solo for Somebody” (2008). When Laura stretched out, she took us all in.

Erin Mei Ling Stuart conquered similar problems in “Pilgrim,” those concerned with balance, stillness and this time, a prop. She started by playing the harmonica, buried inside a large coat, and finished that way. In between she went from expansive gesture to small retreats.

John Milton Hendricks, in “Desperate Kingdom,” with music sung by Travis Santell Rowland, fascinated us with efforts to find comfort in piles of books, while Rowena Richie in “Box Elder II” struggled skillfully with headgear made of shopping bag handles. The humor inherent in these works requires careful attention and gives much delight.

Last and certainly not least was a new solo for Simonse, played by Alex Keitel on viola da gamba. Entitled “Kneel Before Fire,” it demonstrated Simonse’s skill and articulation. He is able to convey his devotion to the dance, his conquest of dance movement and his charisma as a performer with this, as with many of the soulful works he has given us in the past.

Brava Christy! Weave it all together and give us more.