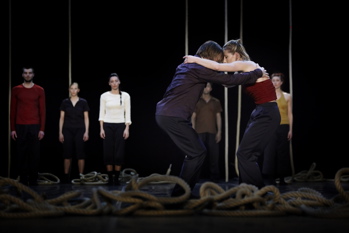 The Gӧteborg Ballet’s Chapel Hill stop (the second and final venue on a recent tour in the U.S. that included Portland, Ore.) featured works by guest choreographers Ӧrjan Anderson, Kenneth Kvarnstrӧm and Johan Inger, and though the dancing was impeccable, the choreography in each of the works left something to be desired.

Ӧrjan Anderson’s “Beethoven’s 32 Variations,” featured nine dancers accompanied live by pianist Joakim Kallhed. Unison gestural phrases gave the work a slow start, but bursts of swift solo choreography drew focus. Careful attention was paid to the hands and arms throughout the piece; dancers shaped the air between their arms with wiping and waving motions, and used the back of the hand as a guiding implement. Non-spotlighted dancers took repose in folding chairs that lined the back of the stage, which, combined with metallic velvets and silks in the costumes, gave the work a loose drawing room feel.

A duet at the end of the work assumed a classical ballet structure, presenting male and female soloists independently and then as a duet. The male soloist’s choreography introduced quaking in the upper body, finger articulation and narrative gestures, while the female dancer, after performing an out-of-place leg hold turn, repeated earlier movement themes. The duet and the work came to a close as the male dancer abandoned the female dancer onstage.

Throughout Anderson’s piece, it was clear that the dancers lacked interpersonal relationships with one another, but their individual motivations in the dance were never apparent. For this reason, the final duet fell short; the chemistry to warrant the work’s potentially dramatic ending simply did not exist between the dancers onstage.

Kenneth Kvarnstrӧm’s “OreloB” transformed the dancers into otherworldly creatures, but did so more through the costuming than through the choreography. Male dancers wore black leotards with futuristic millstone ruff collars, while women donned tutus of a similar ruffled style. A large reflective panel occupied stage left but was not used much by the dancers. Between the sci-fi sound effects in the work’s sound score and its gimmicky use of special effects – particularly, the shower of gold glitter that fell in the final section – Kvarnstrӧm seemed to overcompensate for a lack of thematic clarity in the work’s choreography.

Though the dancers did not move in a way that was alien, they did execute the choreography with technical excellence. A male dancer began the piece with a sensual solo that read as sexually ambiguous; the man drew attention to his head, neck and posterior with hand gestures, and seemed to contemplate his gender identity, or lack thereof. A sexually charged duet marked the work’s second section, introducing a welcome shift of dynamic. Traditional ballet partnering became intimate and intense when the woman locked her legs around the man’s thigh as he shifted his weight side to side. Each dancer gracefully struggled to regain power in the relationship as the pair moved through lifts, moments of weight sharing and gestural choreography.

The last few sections of “OreloB” were visually appealing but lacked a clear choreographic purpose; from an aerobic series of lifts to a soloist dancing in a shower of gold glitter, it was unclear how the parts of the whole fit together in this work.

In the program’s final piece, Johan Inger’s “Falter,” a jungle of hanging ropes compressed the stage’s vertical space, trapping dancers in a live horror story. Dancers used free floating strobe lights to highlight different parts of the stage, to give their own movements inhuman ticks and to scan one another’s bodies. Throughout the first section, unlit dancers slinked across the bottom of the stage like spiders while soloists demonstrated technical virtuosity with complicated jumps and turns.

The ropes gradually raised mid-piece, taking a dancer with them, as a female soloist danced downstage left. The captured male escaped, only to haunt the female from directly behind the rope barrier; his undecipherable whispers continued after the woman left the stage, painting a picture of mental instability. More solos and group work in this section built upon previous animal imagery and established a sense of community amongst the dancers.

The ropes began to fall, coiling on the ground and spewing clouds of dust in “Falter” ’s overly lengthy resolution. Dancers’ movements became slower and more contemplative in this section; dancers’ deep pliés and torso contractions offset the quickly disintegrating set around them. A walking gesture phrase transitioned into a gestural duet at the end of the piece, and for the first time in Inger’s work, two dancers related to one another in a way that hinted at compassion. The lights went down and most audience members rose to their feet, but other viewers’ hesitation confirmed their dissatisfaction with the evening as a whole.

$1.87 (as of January 21, 2021 - More infoProduct prices and availability are accurate as of the date/time indicated and are subject to change. Any price and availability information displayed on [relevant Amazon Site(s), as applicable] at the time of purchase will apply to the purchase of this product.)

$2.76 (as of January 21, 2021 - More infoProduct prices and availability are accurate as of the date/time indicated and are subject to change. Any price and availability information displayed on [relevant Amazon Site(s), as applicable] at the time of purchase will apply to the purchase of this product.)
related posts