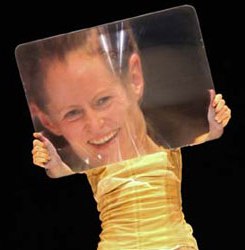 Helena Waldmann received quite a bit of attention with her previous piece “Burka Bondage” (2010). She has an extensive biography with a background suggesting more than what this new piece, “Revolver Besorgen,” represents. (“Revolver Besorgen” translates as “Get a Revolver.”)

Waldmann’s “Revolver Besorgen” begins with a march to Strauss. The soloist clomps across the stage in high block heels. Legs are raised a little more than in a regular march. Brit Rodemund’s military salute shows defined, muscled arms. But why speak of the body when it is so little used? And why speak of movement when there is so little variation?

Lack of variation might be the point, but if so, I missed it. The overly long drooling section made me think the performer had lost all human memory. Here we have the descent into dementia, but there are no inventive recoveries in movement or concept. I suppose when memories dissipate, all sorts of movements walk away, too, but what then, exactly, does that leave us with here? Aggressive in-your-face claptrap motions turn off the novice viewer and irritate the more seasoned. Meta-commentaries are made, but it feels like the same comment over and over, and mostly about “Swan Lake.” Maybe that is demented, but ultimately, Waldmann’s commentary is as unclear as this bland dance.

Although a beautiful dancer, as a performer Rodemund gives no nuance in this piece. Every new look appears the same, including her stretched face behind the plastic mirror, which even so was a neat rear-window device. Yet Waldmann uses repetitive phrasing and schtick that take us nowhere new.

Although I kept hoping that the mound of orange plastic bags in the corner would be used, only two, maybe three, plastic bags were used in the duration of this hour-long solo, but then the bags were used as bags, which really bugged me. Maybe I ask too much, but if you go through the trouble of collecting all those bags, you cannot tell me that the emptiness of the bags represents the emptiness of memory and that they don’t need to be more than a set piece. And diving into them at the end hardly counts. Once, predictably reflecting the title, a plastic bag becomes a gun.

Nevertheless, perhaps the emptiness of the bags is meant to signify our empty cultural memories. But if you are simply breaking down my expectations that something happen with that nifty mound of orange plastic, why get me all excited in the first place? Furthermore, the transitions in the score don’t help locate us any more than do the repetitive movement phrases.

“Revolver Besorgen” uses no unique body language that I can see. The repetitive allusions to “Swan Lake”—the arms, the hops on pointe (though done barefoot here)—are tiresome. “Swan Lake” is a point of reference, and I understand that at one time using balletic terminology might have broken our expectations of modern dance.

But commenting on swans by saying nothing at all about the possibilities of contemporary swans does not lead to a fully realized creation. It just makes me want to walk back to the city park to see the real thing. In Düsseldorf, where Waldmann’s “Resolver Besorgen” was performed, there are actual black swans—three to my count. Now that is something.