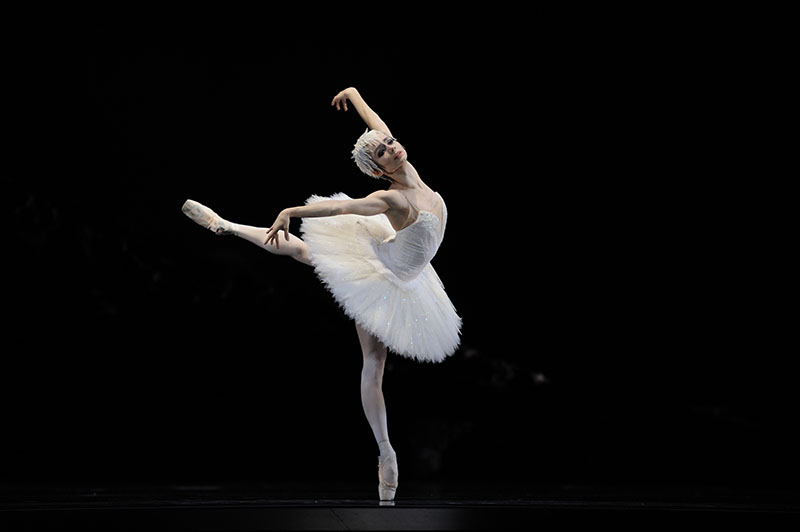 To describe this year’s revival of “Swan Lake” as inert would be harsh, though not entirely off the mark. Artistic Director Helgi Tomasson’s “all-new production” (it actually premiered last season) has veered prematurely into a routine spectacle, the kind big companies roll out to wow casual patrons and show off different couplings of dancers in the lead roles. As such, it’s a turgid affair, as witnessed by the opening night cast.

For the first of this season’s nine-performance run, the roster included two principals from last year’s run, Davit Karapetyan as Siegfried and Maria Kochetkova as Odette/Odile. This time around, both gave weirdly cool renditions. Karapetyan, though not classically handsome, looks the part of an exuberant young prince who would rather hunt and be with the guys than marry one of his mother’s picks from an international roster of bachelorettes. He’s tall and has a triangle of black hair that bobs, rakishly, over his forehead. But he just can’t act–or doesn’t really care to–so you don’t believe for one minute that he has been enchanted by a doomed swan queen. Most of his passable moments came when he was presenting solo work, devouring space with technically accomplished (if dispassionate) jetés and grandes pirouettes à la seconde. A similar strain of blasé infected Kochetkova, except that she’s a marginally better actor, especially as Odile, when her curiously wan smile as the hapless Odette transmogrified into a Dick Cheney sneer (quite evil indeed). She mimes the swan bits with royal (if not regal) port de bras and sufficient grace. And in Act III she executed more than a dozen fouettées rond de jambe en tournant in succession, truly something to behold. But even this amounted to mere showiness, the sort that leaves people applauding but emotionally unmoved.

The single developed characterization came from veteran principal Damian Smith, whose sinister Von Rothbart had a deliciously arch ferocity (effectively tamped down from his over-the-top portrayal last year). Newcomer Vitor Luiz danced one of the nobles in Act I Saturday night, and though he obligingly partnered Frances Chung and Elizabeth Miner in the pas de trois, his big turn—a series of coupés jetés en tournant—lacked exuberance (though in all fairness, that may have been owing to some rather speed-up, slow-down conducting by Martin West). Otherwise, the corps work was superb (a Tomasson hallmark). That many of the swans perform double and even triple duty as peasants in Act I and princesses in Act III speaks to their admirable stamina and discipline, a credit not only to the artistic director but also to his assistant for this run, Lola de Avila. If only her powers could have worked the same magic on the prince and his paramour.

Not all the blame for this production can be laid at the feet of listless lead dancers, however. This “Lake” has been drained of visual consequence, not only by Jonathan Fensom’s outsized, simplistic scenery and Jennifer Tipton’s unnuanced lighting, but also by heavy-handed video projections (Sven Ortel), employed in the hokey prologue as well as in distracting clouds and a colossal moon throughout. The anthracite monolith that  Broadway regular Fensom has designed as a backdrop replacement for what is supposed to be a lush, dreamlike pool is anathema to romance, glacial and angular and evocative of nothing but black ice. It’s hard to imagine any dancer conveying the emotional depth of some of ballet’s most seductive moves against a murky wall that appears more dungeonlike than ethereal. And the stairway to nowhere of the palace in Act III looms huge and intimidating; instead of framing the courtship dances as the intimate, inviting pieces they should be, it dwarfs them, relegating them to insignificance.

As for Tomasson’s reconfigured finale, it feels even more contrived, especially when no emotional connection with the star-cursed lovers has been established. Instead of being in tears for the tragic mismatch of desire and deed, we smirk at the fakery of dancers rushing up a set of stairs and “leaping” into a watery abyss (or wherever they end up–we don’t actually see them because of that intrusive rock). As a metaphor for this “Swan Lake,” that last scene is apt: instead of making a big splash, it ends with a thud.

(6818)
$9.89 (as of January 27, 2021 - More infoProduct prices and availability are accurate as of the date/time indicated and are subject to change. Any price and availability information displayed on [relevant Amazon Site(s), as applicable] at the time of purchase will apply to the purchase of this product.)

(18328)
$2.85 (as of January 27, 2021 - More infoProduct prices and availability are accurate as of the date/time indicated and are subject to change. Any price and availability information displayed on [relevant Amazon Site(s), as applicable] at the time of purchase will apply to the purchase of this product.)

(13508)
$48.99 (as of January 27, 2021 - More infoProduct prices and availability are accurate as of the date/time indicated and are subject to change. Any price and availability information displayed on [relevant Amazon Site(s), as applicable] at the time of purchase will apply to the purchase of this product.)
related posts