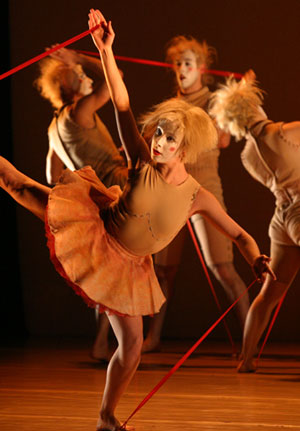 Tel Aviv-based choreographer Inbal Pinto is touring her 60-minute dance/theatre piece called Oyster. A quirky, imagistic and charming work, Oyster can hardly be classified as dance. And yet the theatrical mind behind the work is clearly funneling its influences&#151;vaudeville, Charlie Chaplin and Michael Jackson&#151;through a choreographer&#146;s sensibility. The piece is patched together like a ballet, with a soundscore studded with danceable moments&#151;pieces like "Disco Valzer Lento," "Pasodoble," "Spectacular Tangos," "It&#146;s Been a Long, Long Time," by Harry James, an Yma Sumac warble spectacular, and "Horses in My Head" by Huun-Huur-Tu.

If there is such a thing as an Israeli sensibility at work here, it is, like the Batsheva Dance Company and the work of its director, Ohad Naharin, (with whom Pinto performed), a whimsical, populist approach to movement and message, as concerned with lightening the heavy load born by those living in a tiny time-bomb of a nation, as much as expressing the general angst. More power to Pinto and to Naharin. Americans and, especially, the gloomy Europeans, could definitely take a lesson from these voices, and their approaches to life through art.

Oyster has a circus flavor to it, but the clown/dancers look more like Edward Scissorhands than Barnum and Bailey, with fright wigs and black-coat, Dickensian costumes, A cut-out area upstage offers an entryway for performers, and the occasional whimsical cross-over. In addition to their whitefaces and bad hair, the performers generally carry themselves like chiropractic candidates&#151;slumped and contorted. This is Butoh Israeli-style, but the sense of humor that pokes through more often than not, takes things out of the nihilistic mode that would easily match the darker visual elements here and keeps things black/funny. A woman comes on with an extra long (artificial) arm and artfully scratches herself; two ballerinas offer a fanny-facing duet with not a head in sight; church bells and birdsong combine during an interlude with two flying contortionists being rung in opposing belfries. Everything is disjointed and jerky, everything delights because of the musical choices, the characterizations of the performers, and the mind behind the creation of this bizarre little world.

Without ever having visited Israel, there is a sense that the absurdity of life may cause the inhabitants to look at things in a skewed way. Pinto and Oyster offer a secondhand look at the sensibility of those who don&#146;t often have a voice&#151;the regular Joes of Israel. Are they clowns or heroes?