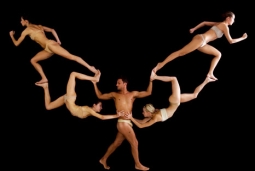 I’m pretty sure Dante did not imagine aerial dancers performing to booming electronic music, but if he did, he probably could not have imagined Inferno—a spectacle by Emiliano Pellisari with the Daimon Dance Company.

The spectacle begins with a man standing on a raised stage, holding the outline of an enormous square over his head.  “Giustizia,” announces the voice over; “Justice.”  Cerberus is not waiting at the gate.  We enter a nondescript world.  The performers disintegrate into nothingness and reappear by crawling out of the ground.

Mid-air, five bodies create squares and circles and ramps.  They form a human stack across the entire expanse of the theater.  A lone figure walks up the diagonal ramp (up and across the backs of the other performers) and into paradise.  Except I don’t think he enters paradise, because once in hell, a person stays there.  Purgatory might be more fruitful terrain for this kind of event—all that juicy redemption and paradise stuff.

There are several sections of Inferno, but all sections begin to look the same.  It’s more of a horizontal forever than a vertical beanstalk.  The brute skill of the performers (dancers? gymnasts? aerial artists?) goes on and on.  Their stamina is incredible.  We do not see the pulleys and harnesses and ropes and stagehands that enable the suspension for the gravity-defying shapes.

But the real star of Inferno is the light.  The lighting designer—Emiliano Pellisari—has coated these efforts with a scrim of alternating red, blue, or white fire.  For a moment, mid-event, I asked, “Am I watching a film?”  Nope.  These are flesh and blood.

The performers constantly walk through air, usually clothed in pale skintight leotards, except for a section with an anti-tutu and another with a huge curtain dress.  The motif of effort is clear.  As different sections appeared, I tried to count Dante’s circles of hell, but I lost count.  (Aren’t there nine?)  Yet I began to wonder how much suspended mid-air swimming is possible in one night.  A little goes a long way.

One section reminded me of Martha Graham’s enormous skirt in “Spectre—1914,” which is the solo in Sketches from Chronicle.  In Inferno, the soloist is flipped and hangs upside down while the skirt is still attached to the ceiling.  Instead of a call to arms, we have a really big fan.  Wind rushes through the skirt.

The horizontal pole section is the river Styx, which the music suggests is now geographically located in China.  Farmland is flooded.  We walk on.

The dawn-of-the-new day shows a man convulsing and growing twigs out of his arms; there are four arms and two twigs, but the lighting lets you see only one dancer.  The adagio where two couples become one and then two is beautiful and hopeful.  They reform unions in impossible ways.

There are finely imagined and articulated shapes in Inferno.  But many of these shapes are not held long enough for the visual effect of suspension to register.  Suspended in mid-air, constantly walking, the bodies become oddly two dimensional.