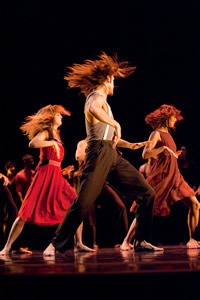 It’s official, Canadians can pass as Italians, at least the dancers of Les
Grands Ballets Canadiens de Montreal can, when performing Mauro Bigonzetti’s
signature ballet, Cantata, at Jacob’s Pillow Dance Festival. Set to
Italian music of the 18th and 19th century, lullabies, Salentine folk songs,
and Neapolitan serenades performed live by the fabulous Gruppo Musicalle
Assurd, Cantata swirls through a rich emotional landscape. The singers
move among the dancers, creating a sense of community, sometimes singing to
them, other times, joining in the spatial formations. Mostly they wander,
just as they might in real life. This, combined with some smashing dancing,
gives the piece its bite.

The earthy movers of Les Grands are born to dance Bigonzetti’s sensual
shapes. As comfortable on the ground as they are in the air, the dancers
full inhabit Bigonzetti’s style, which oscillates between the pedestrian to
the balletic. Stories of love, heartbreak and communion play out as the
singers switch from tender to joyous moods. The only time we know these
gutsy dancers are not Italian is when they speak, a small complaint for a
gloriously danced ballet. Robin Mathes soars in her duet/solo, riding the
wave of Gruppo Musicale Assurd’s quivering vocals, she’s mastered the art of
highly technical recklessness, a quality vastly missing in contemporary
ballet.

The program contained another Bigonzetti work, Four Seasons, set to
Antonio Vivaldi’s familiar score. Although the piece lends a chance to show
off the company’s considerable pyrotechnics, we have to wonder, do we really
need another ballet set to this piece of music?