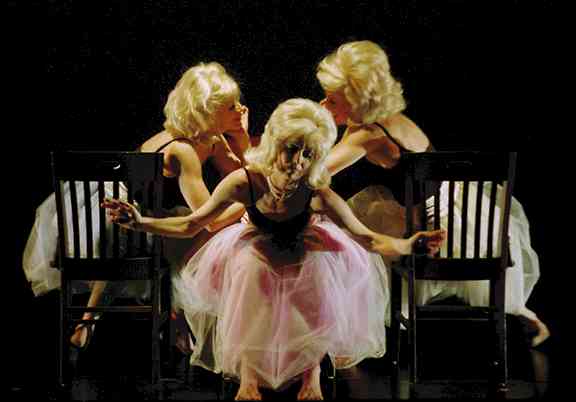 Jeanne Ruddy, a former principal with Martha Graham, established her own company, Jeanne Ruddy Dance (JRD) in Philadelphia at the Wilma Theater in 2001 after battling a life threatening illness. During the next five years, with a core group of eight freelance dancers, she has covered a lot of ground. Ruddy also started to choreograph, tour and build a new tony and funky dance space called The Performance Garage, an off the beaten track and much needed dance/studio theater in Philladelphia’s Fairmount district.

Ruddy’s most satisfying dance works are those that break away from Graham-esque aesthetic torpor. Last year she created a gripping dance noir about three doomed relationships that included context about spousal abuse that was wholly and unfairly ignored because audiences thought they knew what to expect from her company.

Jeanne Ruddy Dance presents their sixth season this spring on the occasion of their finished stage at the Garage that will be opened up to visiting companies. This mixed bag program perhaps represents a transitional time for the company’s development. Opening with one of their strongest repertory pieces Mark Dendy’s "No Fear of Flying" (after Erica Jong’s steamy feminist 70’s bestseller), newly choreographed segments from Dendy for this performance actually detracted from the freshness of his original. It starts as a parody pantomime of Pan Am "in-the-event-of-emergency" flight instructions (Ruddy’s deadpan narration is hilarious) demonstrated by the three flight attendants in deflated blonde bouffant wigs and stewardess uniforms circa 1965. What was a bright-colored fun carry-on when it was first performed in 2001 has become heavier luggage by now. The prologue of paper doll cutout costumes, underlining the theme of repressed housewives, is heavy-handed.

The trio – Janet Pilla, Meredith Riley Stewart and Christine Taylor – exit and re-enter in paisley miniskirts and white patent-leather boots – bugalooing, twisting and ponying to Nancy Sinatra’s anthem "These Boots Are Made for Walkin’". They may have been stylized social dances, but there was little go in their gogo, or much shin in their dig, as they frugged and ponied to 60’s pop songs. Jet-lag led to bloat.

More effective was the sharply danced airy ballet set to Peggy Lee’s "Is That All There Is" with the ladies donning tulle skirts and ironic expressions. Later, the women are bent over or waltzing with ironing boards to Loretta Lynne’s "One on the Way." They were yawning and so was I.

Next was Peter Starling’s drama "The System" with Ruddy and Rick Callender dancing to text about dysfunctional romance. Call it "Dance Scenes from a Marriage"? The dancers are nuanced, even compelling, during intimate moments like tickling each other and cuddly poses, when they aren’t flying into movement angst such as hands quivering around the head or writhing around on the floor. Starling’s study belongs in studio partnering class or brought into full choreographic focus for the stage.

After the break was the meatiest offering, "Still," by red-hot modern choreographer Robert Battle, a David Parsons dancer and former student of Ruddy’s at the Juilliard School. The work is a pas de quartet for two men and two women, dressed in stunning fetishista black shear pajamas designed by Jeffrey Wirsing. Scored to Arvo Part (Lamentate), the work is a study in movement contrasts. The choreographer’s serene phrases break out into counter rhythms and asymmetric patterns that strip away any artifice. He wants to carve out a movement range from complete stillness to convulsive bodies that look like they are being shot. These elements are challenging for the dancers and frequently thrilling for the audience and the cast. Renee Robinson-Buzby, Ben Wegmen, Pilla and Callender possess the required attack. Still, "Still," as danced here, looked like an excerpt from a larger work, its promised deeper messages never realized.

Next was a short, uninspired duet-on-a-bench by Zvi Gotheiner, "Enfold," a minimalist seated dance performed charmingly by Sun-Mi Cho and Michael Miller, but too elemental for performance.

Ruddy’s premiere, "Woa Cholena," referring to a mythical Native American Bird, had interesting elements, but the feel of a middle draft. Scored to Stravinsky’s Concertino for Twelve Instruments, the piece managed to be derivative of both Balanchine and Graham, but nonetheless had some glimpses of original passages. Three women were fronted by Callender as the "great white bird." The dancers executed arabesque variations with attack and inverted friezes with dramatic clarity. Group jetes and configurations had a pure dance feel that looked layered on and underrehearsed, but Callender’s arabesque variations and inverted body moves have both drama and technical clarity. The surprise ending with the women catching the towering Callender in a jump was a thrilling finish.