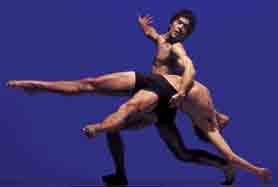 Going to a Joe Goode Performance Group show these days is a little bit disconcerting. Like, "Gee, I thought this was a dance company." Well, it is a dance company and then some. There&#146;s singing and acting too, not to mention some wonderful music, lighting and set design. But rather than an evening at the ballet, it&#146;s more like a short (very short) Broadway (OK, off-off-Broadway) show.

Choreographer/director Goode has long been known for combining his movement with song and the spoken word. Now he can add "playwright" to his resume. The balance has tilted since the success of Body Familiar. His newest work, Folk, given its world premiere Thursday at Yerba Buena Center for the Arts, is more like a musical with some dancing in it. While this may disappoint a few die-hard dance fans, it makes for some terrific theater. And theater is what Joe Goode says he is all about.

Folk grew out of a common paradox in contemporary life. We long to simplify, to "get away from it all," but once we do we find that the simple life ain&#146;t so simple after all. The complexities out in the country may be different from those in the city but they are complicated just the same.

This is the story of an LA artist (Goode) who decides to have his breakdown in the High Desert. He dresses all in green and sits around examining leaves. He can&#146;t work. Gradually he &#150; and the audience &#150; meet some of the other "folk" in the area. Snake Boy is a dysfunctional outsider who sleeps outside, reads books from the library and takes impressions of dead men&#146;s faces on cloth, rather like a modern day Shroud of Turin. When offered the chance to mount a one-man show of these decidedly idiosyncratic works, he confesses that he would really like to give up his hobo ways and make a career in retail management.

Then, there&#146;s the crew at the local diner, principally Paulina, the pert little waitress who has a way of picking losers in her love life; Miguel, the cook who is about to become the next one; and Amber, who serves up some sass and down-home wisdom with the fries. The ending won’t be revealed here, but it&#146;s funny and moving and true. And there&#146;s even some terrific dancing, principally Snake Boy&#146;s tortured solo and Paulina and Miguel&#146;s love pas de deux. The set &#150; also designed by Goode &#150; is a knockout, as is Beth Custer&#146;s music, ranging from New Age electronic to Country and Western.

Also on the program, Transparent Body is an earlier work in a similar, although flashier, vein. In a kind of circus setting, a gay man (again Goode) reprises his life, his rejection by his father (you guessed it: Goode in a different costume) and his gradual coming to terms with it all.

Although one suspects a possible thread of autobiography or, at least, biography, this work rings less true than Folk. It has a kind of commedia dell&#146;arte flavor, goofy costumes, raunchy language (one elderly couple walked out of the theater midway) and frequent disjointed shifts between high drama and low camp. There&#146;s more dancing, however, and Goode&#146;s signature lifts are prominently on display: women lifting women, women lifting men, men lifting women and men lifting men. One also suspects there is a message about bending some gender-expectations in that.