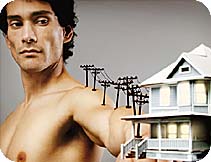 Hometown is the final installment in a trilogy choreographer Joe Goode has conceived dealing with "the extraordinary dimensions of ordinary people." The new work is a chance for the members of his Performance Group to take on new characters, this time in a locale closer in feeling to his home turf, San Francisco. The other pieces of the trilogy, Grace and Folk, were also blends of patchwork narrative, using scenic elements, live music and dancing to generate moments of beauty.

There is the sense that Goode (who appears, briefly, in all the pieces) is a kind of fatherly social commentator, someone who sees and loves and makes fun of the world around him, who chooses to make art out of homespun things as a conscious alternative to the bleaker possibilities which also exist out there. There is always a darker undercurrent running through.

In Hometown, the central tension is not so much about where one comes from as where one decides to settle. A central couple, Felipe Barrueto-Cabello and Elizabeth Burrit, are "two little birds looking for a nest," while the rest of the company, Marit Brook-Bothlow, Melecio Estrella and Rachael Lincoln play urban types, a hooker and a couple of cursing party people, the kind of folks who would never make it in the suburbs, but probably grew up there.

The piece offers Brook-Bothlow the opportunity to create a striking characterization of the hooker, and the funkily costumed Lincoln and Estrella are initially hilarious in their introductory riffs. Still, after all these characters are created, Goode doesn&#146;t seem to know where to go with them. The dramatic tension isn&#146;t there because the choice of suburbs vs. city is a rather mundane one, and the need for these characters to struggle with something beyond that becomes rather forced. The angst of the urban people and the desire for safety in the suburbs (complete with a wheel-on mini landscape that the characters dance on) is pointed out to be, predictably, angst in the suburbs vs. a need for safety in the city, but beyond those reversals, things never build into the catharsis Goode usually creates. Searching, here, is of an artistic rather than domestic basis.

Still, with original music by Beth Custer, played live by her Ensemble at the Yerba Buena Center for the Arts opening, and interesting video projections and telephone pole set pieces, and with the usual terrific, contact-improv-meets-capoiera-with-technique dancing, an evening with the Joe Goode Performance Group is an opportunity to see how one very original artist has managed to rethink dance, theater, and even, for that matter, musical comedy. Goode is one of the most brilliant and undervalued theater artists out there.