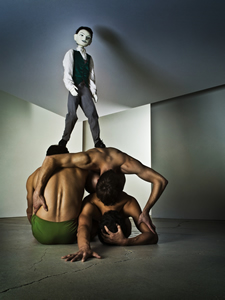 As the Houston Rodeo rolled out of town, it may have seemed that the gay rodeo rolled in with the arrival of Joe Goode Performance Group.

When it comes to sexuality, America seems to be as 2010 as it is 1950. The same decade that witnesses the rise of same-sex marriage witnessed, in recent elections, including the euphoric campaign for “Change,” an increase of anti-gay, lesbian, trans legislation (most successful). Gay roles and gay films continue to be profitable and award-worthy (regardless of their politics or if gay actors get any roles) and television has gone gay to the point of indifference. It’s hard not to think of this when watching the captivating dance theater of Joe Goode. What is the role of the gay artist in an age of such vicissitudes? The recent program presented by SPA Houston asks its audience to consider whether the representation of gay experience alone is still the stuff of good politics or rigorous art.

Goode’s program featured his 1996 “The Maverick Strain,” a camp homage to and, as he puts it, “deconstruction” of The Misfits, which featured the always erotic and vulnerable Montgomery Clift butching up the west to the tune of Clark Gable and Marilyn Monroe’s last role. The company deploys moveable fences, velveteen pants, feather boas, cowboy hats, and furry chaps to generate a fascinating landscape (replete with song, dance, dialogue, and monologue) in which to consider this myth of American masculinity, rugged and individualistic to the point of desperate isolation. The piece is most interesting and significant when the dancers evolve a series of phrases based on iconic poses of the old west—shooting, getting shot, killing, and dying. One becomes another as an intense and desperate intimacy develops between the bodies on the stage: resistance, longing, struggle, capitulation, and expiration over and over again. At other moments, the piece is pure camp, but arguably cowboys were camp before Stonewall. As the dancers read and repeat dialogue from The Misfits (switching genders) as they go, one wonders if this is anything more than mildly ironic in the wake of Brokeback Mountain. In spite of wonderful sections, compelling performances, and an enthusiastic crowd, it wasn’t clear.

If “Maverick Strain” sought the soft underbelly of rugged American masculinity, Goode’s “Wonderboy” (2008) started with the vulnerability of the boy-artist facing a forbidding world through a window. This piece was the more technically ambitious in as much as that young boy was a puppet fashioned by master puppeteer Basil Twist, with whom Goode has previously collaborated. At first, the young wonderboy stares out with regret, his voice (modulated up several registers through a microphone) provided by various dancers in a series of monologues and songs. At first, the piece is an elegant and odd reflection on the nature of observation—how easy it is to watch and not to participate. Three dancers manipulate the puppet as the rest act out his powerful longing for wonder and for the charms of what is not the self, which produce an equally powerful repulsive force. As the dance progresses, the puppet enters the world and the performers manipulate the puppet, move it around the stage, and interact with it. It seemed, however, the monologues and songs that framed the movement declined in interest and complexity as the movement increased in interest and complexity. It becomes clear that this sad young man suffers fear, longing, and shame as all gay artists do. Goode admitted in a Q&A session after the performance that he was the young gay boy born in Virginia in 1951 and plagued by a sense of isolation and deviation from the norm. Hence the puppet begins to employ words like “exquisite” and “tintinnabulation,” envisions his neglectful parents, recalls the taunts of cheerleaders and other bullies, longs to touch other boys, etc. The gay artist’s sensitive, coming-of-age narrative certainly suffers playful satire here, and fascinating gestures emerge amidst this exploration. Still, at moments the narrative overdetermines both movement and text, leaving the audience, at too many moments, with too little wonder.

Goode’s dancers are a marvel to watch. They move fluidly and distinctly yet still constitute an intimate and organic whole, which is clearly a product of the environment Goode creates around him—thoughtful, earnest, funny, ironic, and intensely felt. There are no simple, easy, or even good answers to the questions Goode raises. At moments it seems the thinking behind the performances has too little of the risk Goode encourages his dancers to explore in movement on the stage. But he’s a serious and seriously playful artist tangled up in uncertain times in which both art and sexuality are provocatively and dangerously up for grabs.