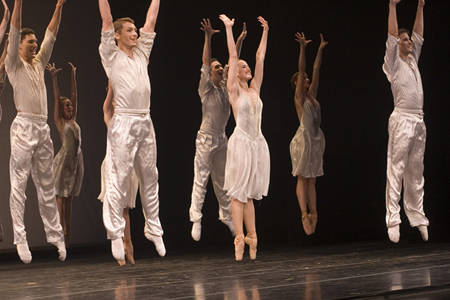 Cal Performances is doing a big Twyla Tharp orgy this fall, with Tharp works offered by three big companies on tour–Joffrey Ballet, American Ballet Theater, and Miami City Ballet, all in the same month—quite the programming coup. The Joffrey Company brought along Tharp’s “Deuce Coupe” from 1973. Once seen with graffiti artists creating a live backdrop (and sending noxious fumes into the audience) this juxtaposition of ballet and loosey-goosey modern dance, and the use of music by the Beach Boys, spawned a revolution in ballet. Never again were choreographers limited to classical music; and modern dance, once seen as the antithesis of classical technique, became one more weapon in the creative arsenal of a new generation of dance-makers. Tharp, never one to follow in the footsteps of any other artist—did things her way (she still does) and the result was a slew of dances that created a genre and will undoubtedly last.

Of course, “Deuce Coupe” was an exercise in nostalgia, even in 1973, using sun-drenched AM-radio pop music a decade old. Today, the entire piece carries with it more than a whiff of the good-ol’ days. Presented by the very young-looking Joffrey-dancers, this piece has none of the edge it must have originally possessed, and like the toxic fumes that were removed for the benefit of the audience—everything about it looked sanitized. There were still delightful moments, and good dancing by many of the company members, but, on a whole, things look over-smiley, too cute, and not doing anything particularly foot-tappy Surfer boy falsettos be damned.

Also on the program, Joffrey’s own “Pass de Déesses”, (1956) was a visualization based on an old ballet lithograph showing three famous ballerinas of the Romantic era, Lucile, Grahn, Fanny Cerrito and Marie Taglioni. Set to suitable piano music by John Field , (performed by Paul Lewis) Joffrey seemed to be at once revering and ridiculing the postures, statis and purity of ballet’s original style. Well-danced by Maia Wilkins, Jennifer Goodman, Valerie Robin and Michael Levine, it was a curious companion-piece to the Tharp work. Joffrey’s subtle humor and comfort with stillness seemed antithetical to the younger choreographer’s hyper-kinetic youth fiesta.

“Sometimes it Snows in April” (1993) closed the show. Another curiosity, an artistic pairing of the previously rather rigorously experimental modern dance choreographer, Laura Dean, and the music of Prince, it was gratifying to see the architecture of the piece, repeated diagonals and overlapping waves of movement, (a little ironic since Dean made her reputation with the use of spinning, and circles). The dance, originally presented as part of “Billboards”, which also featured the choreographic work of Charles Moulton, Peter Pucci and Margo Sappington—all from the modern dance world, never would have happened without Twyla Tharp. The question is,, however, why the use of modern dance and this particular music—for a ballet company? This was perhaps excessive seasoning for a meal, an overly-busy fusion–like a T-bone steak over lentil stew topped with chocolate sauce. Why didn’t they go MTV for heaven’s sake? Prince is Prince, and ballet is ballet. What does modern have to do with it?