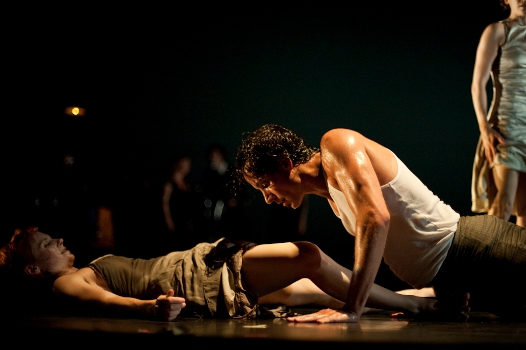 Kate Weare’s company is phenomenal. The Bay Area dance community got a chance to applaud “one of its own made good” as Weare, an Oakland girl who studied at the Shawl-Anderson Dance Center in Berkeley and danced at West Wave with Joan Lazarus, among others, brought her company to the ODC Theater for her latest work, “Bright Land.”

The choreography is post-modern, contemporary, lively yet poignant. Unlike many choreographers today, Weare is able to bring dramatic relationships and human significance to the powerful interactions of the dancers. It’s not just the usual contact acrobatics. The dancers—Adrian Clark, Douglas Gillespie, Leslie Kraus and Marlena Penney Oden—are four of most intense, accomplished performers in the field today.

Accompanying the series of ensemble, solo and duet pieces were gifted musicians from the Crooked Jades, a bluegrass band, singing old-time songs that underscored, though did not illustrate, the dances. Jeff Kazor is the lead composer and singer: others are Lisa Berman, Charlie Rose, Rose Sinclair, and Karen Celia Heil. The songs are traditional, funny and sad. As Weare says, the music “speaks of life’s struggles with sly humor and deep sadness mixed together.” So the dance goes.

Sometimes the women dance together; sometimes the men. The movement material flows easily but confrontationally between the four performers, so that “Bright Land” becomes one long, profound family interaction. Sometimes the men pound the floor. All use percussive gestures, clapping, slapping, stamping, touching, and slapping. The two women have a loving competitive duet, shaking fingers at the end to illustrate how “hot” they are. The men dance a similar duet but resolve their interaction by both playful and antagonistic teasing. The man/woman duets combine the erotic attraction and rejection through the use of amazing lifts, quick hand gestures and fast turnings of heads and limbs.

Several times during the work, the dancers strip down various layers until the women are in white slips, the men in tank tops and pants. Then the play turns deeper, finally resolving in a poignant duet between Kraus and Gillespie. She has flung herself on his legs and they rest together. Then as Kazor sings “Waiting City Shining” joined by Berman on the Dobro, Kraus and Gillespie do a waltz-like dance, then a floor duet. At the end Kraus, straddling Gillespie, butts her head against his chest until he is flat down. Clark enters and Kraus and he end “Bright Land” with slow embrace (change partners and dance) except for an”Indian War Whoop” finale curtain call. The entire ensemble has accomplished a portrayal of hard times, play times, sexy times and, as Weare notes, “an essential desire to feel connected.” The audience is intrigued and thoroughly enthralled.

Weare and company will appear at the Joyce Theater, New York, in June 2011.