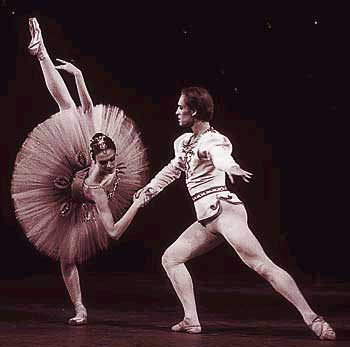 Nowhere is the tradition of ballet stronger than in Russia. Soviet dancers have been venerated throughout the dance world ever since Serge Diaghilev brought his Ballets Russes out of Mother Russia and into the wider world in the early years of the 20th Century. Those were the salad days, with Nijinsky, Pavlova, Massine and Karsavina gracing the international stage. Their legacy was carried on brilliantly by a second generation: Danilova, Toumanova, Youskevitch and, of course, the great George Balanchine who began a tradition of his own. But it was not fated to last forever and, politics and economics being what they are, in the past 50 years Americans have been limited to glimpses of the rare defectors like Baryshnikov and Nureyev &#150; who also became legends in their own time.

So imagine the excitement when the famed Kirov Ballet, formerly the Maryinsky Ballet of St. Petersburg and training ground for most of the aforementioned dancers, announced a North American tour. And imagine the California excitement when Berkeley was chosen as the first venue. A tragic fire recently destroyed many of the historic Maryinsky sets and costumes. Luckily, the material for the tour was already packed up and on the ship sailing to the U.S.

Could it possibly get better? You bet! The one sour note in Cal Performances&#146; outstanding dance series at Zellerbach Hall has been the frequent lack of live music (except for Mark Morris who insists on it). Well, the Kirov Ballet is traveling with its own Kirov Orchestra, a virtuoso ensemble in its own right and none other than Valery Gergiev, general director of the Maryinsky Theater in addition to his busy conducting schedule, was on the Berkeley podium, sharing duties with Mikhail Agrest. While other ballet orchestras manage to get by with accompanying the dancers, the Kirov is in a class by itself as it also is the orchestra of the Kirov Opera. To hear Maestro Gergiev weave Rimsky-Korsakov&#146;s rich Scheherazade tonal tapestry or articulate each individual instrument in Stravinsky&#146;s Firebird was a little glimpse of musical heaven.

But not to forget the dance. The first several programs are an homage to the great Mikhail Fokine, with some of the most memorable works he ever created: Scheherazade, The Firebird and Chopiniana (popularly known as Les Sylphides). A traditional Russian ballet performance always began with a &#147;white&#148; ballet; usually an excerpt from Swan Lake, Pavlova&#146;s famous &#147;Dying Swan&#148; or this same Les Sylphides. This is a custom largely ignored nowadays but there is something to be said for light-as-a-feather birds or ethereal sylphs to warm up an audience for what will follow.

First performed in 1908, Chopiniana essentially is a plotless ballet, set to eight brief orchestrated Chopin piano pieces. A poet dances in a forest glade with some lovely maidens (probably of his imagination) and, although nothing happens, it is unforgettable. On opening night, handsome Danila Korsuntsev was the poet, his black velvet vest the only dark touch amidst the white tutus of the women, and Daria Sukhorukova, Irina Zhelonkina and Daria Pavlenko his trio of principal partners. But the true star of this work has always been the corps and the Kirov women, bending and boureeing across the stage, were a poet&#146;s dream indeed.

From visions of heaven to the earthiness of Scheherazade, an Arabian Nights fantasy about a macho ruler who exacts a bloody revenge for the infidelities of his favorite wife and the ladies of the harem. Here Fokine constructed pseudo-Oriental moves within a traditional balletic framework and set the whole against Leon Bakst&#146;s wildly colorful palace, the dancers wearing sexy harem pants and bra-tops. Sex is what it&#146;s all about and Igor Zelensky oozed it as he wooed and won Uliana Lopatkina as the favorite. Leaping slaves, undulating odalisques and an orgy that culminates in the massacre of the participants. Who needs television?

Perhaps saving the best for the last, the Kirov performed Fokine&#146;s rarely done Firebird as a finale. Tatiana Amosova made the most of the title role, coquettish in the beginning as she danced around a tree of tempting golden apples, commanding in the later scene as she vanquished the forces of evil. Yana Serebriakova was the meltingly innocent princess, imprisoned in the magic garden of the evil sorcerer Kastchei (a marvelously menacing Vladimir Ponomarev). Victor Baranov was the bumbling prince who sort of stumbles into a heroic situation.

First performed in Paris in 1910, the fanciful fairy-tale provided the dazzled Parisians with a picture of medieval Russia replete with magic and monsters and a happy ending with reunited lovers dancing off into the sunrise of a new day. The vision has not faded over nearly a century. A little magic is needed in our world as well and the incomparable Kirov weaves an unforgettable spell.