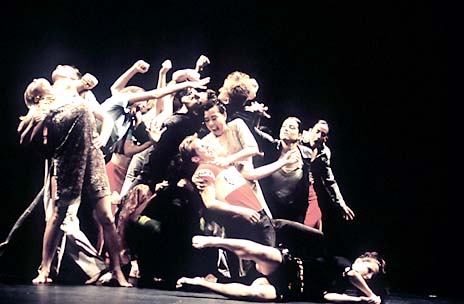 The American premiere of Joachin Schlomer&#146;s La Guerra d&#146;Amore: Madrigali Guerrieri e Amorosi (The War of Love: Bellicose and Amorous Madrigals) is the first time an evening-length work by this choreographer has been presented in this country. Previously, he has created short works for the White Oak Dance Project (Baryshnikov&#146;s endeavor) as well as one for ODC, the San Francisco modern dance company. In this piece, he uses music by Claudio Monteverdi, whose madrigals are among the finest in the literature, augmented with instrumental works by other composers of the period. Cal Performances his imported this presentation intact with music director Rene Jacobs leading a large ensemble of period instrument musicians and singers.

Musically, the presentation is of a high order. The precision of the playing, the musicality and expression, and the clear diction of the singers all came together in an exemplary performance. For modern audiences (excepting those who are devotees of music of this period), a whole evening is too much of a good thing. The audiences who witnessed the performance of the music in its day (the early seventeenth century) were not expected to sit still throughout the whole presentation, as is done today. So in using this music as the basis for an evening-length work, it takes more than musical magic to hold the audience&#146;s interest.

Based upon seeing this one work, it appears that choreographer Schlomer does not yet have the breadth to sustain an evening. The first half of the program, some 90 minutes in length, was largely monochromatic.The dancers rarely communicated with one another, often keeping their heads focused downwards.They tended to keep their torsos stiff, using only their arms and legs for expression. Strangely, for a piece that is ostensibly about the relationship between men and women, the dance kept the sexes apart and in groups. There was little attempt to convey in action what the words of the madrigals expressed (and thanks to the clarity of the singers, anyone with a command of Italian could understand what was being sung).

The second part of the program had more movement variety and expressed some emotion, whereas emotion had been suppressed in the first part. There was a slow-motion pantomime of a &#147;war&#148; between men and women&#151;people punching each other with violence&#151;that caused the audience to titter. For a change, there were some sprightly dances, and overall the dancers were allowed to move with greater freedom. The most uninhibited dancing took place in the form of an extended curtain call.

The dancers were disciplined and well trained. Because there was an absence of solo work, it is difficult to single out anyone in particular. However, among the singers, the mezzo soprano Marisa Martins was exceptional. All the singers were integrated in the piece, joining in among the dancers. Only occasionally were the singers apart, providing the music&#151;more often they were part of the action. Ms. Martins had several sections in which she sang and danced, notably one long pas de deux where she was supported by a male dancer as she sang about the anguishes of love. Given her talent and abilities, it is a shame the choreographer did not make greater use of her gifts.

It is difficult to guess what the choreographer wanted to convey with this work. Its reticence was in stark contrast to the strong emotions expressed in the text. There were hints that certain actions had significance, but the significance was not clear. Great artists are capable of presenting disparate images that at first seem puzzling but in their cumulative effect suddenly open up new perceptions. That did not happen here. Despite repeated movement motifs, the final impression of the piece was like the big, blank white brick wall that dominated the back of the stage. There was a canvas (of sorts), but it needed something written on it that added shape and color.