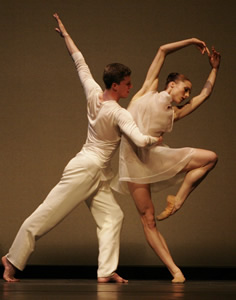 Perhaps it was the narrowness of the drab high school-like theater stage, that made the opening piece, “Jangle: Four Hungarian Dances”, appear a bit more like musical theater then it normally would. Or, maybe the peasant style costumes added to this appearance of watching a high-energy lyrical dance ala, “Fiddler On The Roof” or some kind of folkloric “Chorus Line.”

In contrast, “Men’s Stories: A Concerto In Ruins” followed with a dimly lit, hazed stage, surrounded by a multi layered audio collage. This laminate audio track and original music by Scott Marshall and Lar Lubovich (although Lubovich was not credited in the program,) became an invisible wave, a fragmented dream, for nine male dancers in velvet tuxedo tails to flow through. They danced in gesturing combat, tides of gymnastic undulation, and dynamic solos to an overlay of abrasive, yet, mesmerizing helicopter noise – mixed with the lush vocals of Jimmy Scott; the technical chirps of Star War’s – R2D2, Beethoven’s sonatas, and the infamous jingle from the X Files, among others.

“A Concerto In Ruins” is symbolic dance of the demise of a man’s inner and outer beauty as it is “ruined” by social conditioning, while some inner beauty is maintained almost as a dim flicker. It best represents Lubovich’s background as a visual artist both in choreography, staging, and in his textural composition of sound/music. Part !: Allegro Giacoso, and Part III Schizo Scherzo, were the strongest segments, with romantically fluid dancing surprisingly void of sensuality, impressive energetic solos (especially, Brian McGinnis) and a stylish pas de deux. Unfortunately, the caricatures of men yielding combative or comical gestures in Part II: Adagio Maetoso – came off contrived and was the least satisfying, as was the ending’s use of a marionette being pulled by – society’s strings…?

“Dvorák Serenade” is like a breeze that enters though the curtain of a window left open in the moonlight. This gentle gust circulates through both the off-white lingerie-like costumes and in the breezy balletic sequencing. (see photo) With its four movements, Lubovitch’s choreography continues its non stop lyrical precision – softly this round yet, again still without a pause to linger on one particular moment or montage.

In the third movement, “Larghetto”, the focus on the pas de deux became more about the miss matched tension of talent than the choreography itself, as Mucuy Bolles danced full of embodied artistry, while her partner, the tallest member of the company, Scott Rink, appeared confined by good technique. (Perhaps this imbalance is due to the fact that half of the company, although extremely skilled, has just joined Larbovitch this last year.)

The lack of pause in “Dvorák Serenade” was a challenge throughout tonight’s program beginning with Bartók’s first note, leaving one impressed, yet ultimately indifferent for lack of a Zen moment of reflection, heightened stillness, or that breathless moment of suspension…