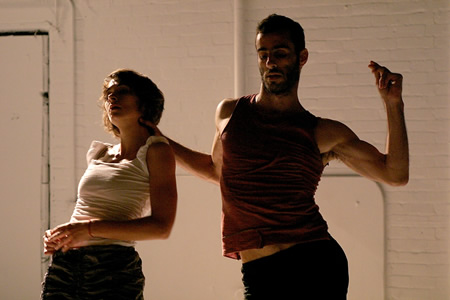 What’s a stranded dance critic (with a bad case of the Jet Blues) to do with a couple of unexpected days in New York City? I headed to 92nd Street Y Harkness Dance Festival to catch a LeeSaar The Company, a troupe on the rise, at the Ailey Citigroup Theater.

Dancer/choreographer Saar Harai and actor/playwright Lee Sher arrived in New York City in 2004 from Israel with few resources outside of their impressive collective talents.

LeeSaar The Company opened the festival with Part II, a new work based on two previous works, Herd of Bulls and Moopim. Not having seen either of the earlier works, I entered their world mid-story.

A door opens, a yellowish light pours on to the empty stage. It’s not remotely sunny—more like a warning light, a state of alert, danger, and uncertainty. Sher enters looking traumatized and in a trance as if something has just happened offstage. She attempts to speak but the sound is extinguished, as if pulled back inside her. (Interrupted sound forms a reoccurring motif.) The door remains open throughout the performance—a telling sign, that all is not safely enclosed. The portal seems less like an escape hatch and more like a means of surveillance.

An explosive duet between Harai and Russella Fusco follows. They are not kidding about the program note stating “we seek the extreme within ourselves.” Fusco and Harai fling themselves in taut lurching movements. They tear up the space with their slicing movements. At other times the space itself is doing the tearing, as if invisible forces push pull, shove, and yank. Mid-air hurls look fearless and unplanned. It’s at once brutal and terrifically exciting with crisp unison and escalating tension. A battle mounts with an unnamed enemy. The two dance with a raw visceral conviction combining virtuosity with sheer dare-devilish gusto. Rare moments of release provide momentarily relief.

During another of Harai’s duets with Ellen Cremer, the feeling oscillates between tenderness and revolt. He cradles her in his arms, she slips off. Comfort is temporary.

There’s much about boundaries that is of interest. When the performers are not dancing they are sitting in the front row in a continual state of alert, nearly guarding the stage area. They are among us and yet not fully disengaged from the stage space. Several times during the show Harai catapults himself out of an audience seat onto another dancer. It’s an aggressive brand of dance making for sure.

Part II is a spare, uncluttered work. A lone bundle of work lights makes the set, while Brendan Terzic’s period folk music (played on the traditional Middle Eastern oud) punctuates the silences. Bruce Steinberg’s lighting carefully isolates intimate moments that hone in on the delicacy of the piece. Sher whispers into Harari’s ear. She speaks in code but the tenderness of the moment comes through. Carefully selected choices throughout make for a streamlined, albeit difficult to decipher, work; there’s no fat on this dance. Sher and Harari strike a curious balance between explosive action and delicate reflective moments. Even seductive moments dot the terse climate. Still, the atmosphere feels fearful and unsafe; there’s no rest for the weary here.

There’s a curious rhythm to their work—the way things start and abruptly stop. It’s both effective and unsettling, yet always engaging. The performers—ferocious all—never let a second go to waste. Sher and Harari don’t just grab your attention; they wrestle it to the ground. As to what they are exactly saying in their work—it’s more than a bit obscure.

Close to the end, the troupe returns to their seats to read a manifesto of sorts, the only text in the dance that is comprehensible. What’s interesting is not so much what they are saying but the fact that they are saying it to an empty space.