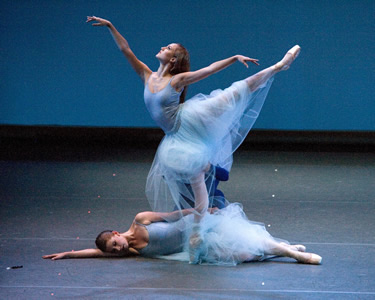 One of the joys of watching a fledgling company – be it dance, drama, music, or sport – is observing its growth from gawky adolescence to sophistication and maturity. The missteps seen along the way only enrich the experience of watching this development. The Los Angeles Ballet (LAB), gives Los Angeles audiences the opportunity to see this happen.

Under the tutelage of its two seasoned artistic directors, husband and wife Thordal Christensen and Colleen Neary, the LAB, is rapidly taking shape before our eyes. Between this, their third program of the inaugural season, and the March program they have gained poise and strength. The current program is grouped under the title An Evening of Balanchine, featuring samples of Balanchine choreography from three decades: Apollo (1928) and his first collaboration with Stravinsky, Serenade (1935) lyrically set to music by Tchaikovsky, and Rubies (1967) the middle movement of a full length ballet, Jewels which was another collaboration with Stravinsky. It is hard to imagine a more varied program or one that kept each of the 21 dancers literally on their toes for an incredibly strenuous evening.

Ms. Neary, a prima for Balanchine from 1969 – 1979, opened the evening by explaining how Balanchine had taken her aside as a young dancer and mentored her to teach dance so she could carry on her skills beyond the point of performance. One of the lessons he taught was that dancers amplify the music. They should dance to the music and generally avoid counting. The young dancers of LAB have mastered this to a greater degree in some of selections than others. In Rubies, the last and most satisfying selection, Stravinsky’s jazzy score provided a vehicle for their youthful enthusiasm and energy. There was no question, the beat was felt and, for the most part, the dancers lit up. Corina Gill, with her inhumanly flexible body, shear joy in dancing, and her glorious extensions captivated the audience. She was ably partnered by Sergey Kheylik whose technical skills and strength supported her well, but who needs to allow himself to let go, and let the music carry him along too. He clearly would float even with less intensity.

While Rubies was jazzy and entertaining, Apollo is the Balanchine/Stravinsky collaboration in its serious and abstract mode. Elizabeth Claire Walker’s brief, but strong, appearance as Leto giving birth to Apollo is riveting. Her understanding of modern line and form creates a vivid picture of giving birth in all its pain and glory. Here too, Corina Gill as Terpsichore shines as she seems to glory in the pure act of dancing. Though she hardly ignores the audience I had the sneaking suspicion that she would dance even if there were no one there to see.

It was in Serenade, that the company most showed its growth and its most of its growing pains. Serenade is cool and classically demanding. While the dancers are supposed to appear as though they are something like a bank of willows blowing in the winds, arms floating back and forth, they are also called upon to execute intricate patterns of footwork and movement. In the March program this kind of a challenge would probably not have worked out well. Come May they generally have the Balanchine line and are a corps moving as a graceful unit. Hopefully by next season they will be able to put aside counting and allow their graceful bodies to be carried along by the score. Brooklyn Mack, guest soloist from the Orlando Ballet closed Serenade, with a sequence of breathtaking leaps; regrettably his lifts were not up to his leaps making his partnering labored. As I said, there are growing pains.

For this young company to have become so polished so quickly gives holds great promise for the coming season. Barely six months old as a company they have come together to create a unifying whole. Now the community must do its part and support this sincere and talented troupe. Los Angeles could yet have its own resident company.