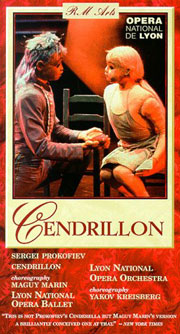 Cinderella has been many things over the years &#150; a symbol of sibling-induced suffering, a role model for ambitious little girls, a saccharine Disney icon. According to French choreographer Maguy Marin, she&#146;s a real doll. Kind of a rag doll at that, living in a multi-level doll&#146;s house. Instead of a coach, she rides to the ball in a miniature yellow convertible that Barbie would envy and …but I&#146;m getting ahead of the story.

The Lyon Opera Ballet brought Maguy&#146;s landmark Cendrillon to Berkeley&#146;s Zellerbach Hall Thursday and, although it was clever, amusing and wonderfully danced, it was not all fun and games. The innovative French choreographer, who set this work on the Lyon troupe in 1985 before she struck out on her own, sees Cinderella through a child&#146;s eyes and, as such, the tale is more Grimm than Perrault, part nightmare as well as a dream of love. With the dancers wearing doll&#146;s-head masks and a set that is a star in itself, Cendrillon strongly hints at the dark side of human existence. With its dominant themes of jealousy, powerlessness and deceit, it is far more than child&#146;s play. Kids will love it for sure, but adults will recognize the remarkable work of art that it is.

The Lyon dancers, famed throughout the world for their adventurous approach to ballet, are superbly suited to Maguy&#146;s unusual choreography, set to the familiar Prokofiev score with occasional interpolation of children&#146;s laughter and cries. The blank stare of their doll&#146;s eyes serves to accentuate the automaton-like movement she has devised. Susana Riazuelo is a wonderful heroine; awkward as she is taught to dance by a coterie of fairy ballerinas, full of wonder as she explores the magical world that has suddenly emerged around her and all-too-human in her scullery maid despair. Until she loses her slipper, she is onstage for every minute of the ballet &#150; quite a feat since midnight strikes relatively late in the game.

Pierre Advokatoff was her Prince, his crown flashing lights like a Christmas tree and &#150; in a stroke of comic genius &#150; sitting on a baby&#146;s high chair instead of a throne. Together, he and Riazuelo were children getting to know each other on the playground, tentative and trusting by turns. They lick lollipops (served as supper at the ball) and jump rope. But they also are adolescents falling in love and their waltz conveys that with tenderness and joy. His despair upon losing her is genuine and moving, even if he is just a silly kid.

Now about that stepfamily: Yuck! They&#146;re as ugly and unpleasant as ever, especially the stepmother (Elena Surace) who has a delightful way of hitching up her bosom every time she goes into action. She never misses a chance to put Cinderella in the shade, actually sitting on her when the Prince comes to call, glass slipper in hand. The overstuffed sisters (Meredith Dincolo and Flora Bourderon) follow suit shoving, taunting and stealing Cinderella&#146;s lollipop at the ball. Papa (Omar Gordon), seemingly powerless to protect his beloved child, goes one better. He brings her a champion. Upon returning from a business trip, he hands the stepsisters prettily wrapped presents and gives his own daughter his heavy suitcase to lug away. But kids will be curious and, when she peeks inside, instead of shirts and underwear she unearths an enormous rag doll which magically turns into a fairy godfather, complete with a light sword that works as a magic wand. His suit flashes on and off as well as he moves robot-like across the stage. (It seemed as if George Lucas had a hand in the production design).

After the ball, when the Prince goes off to seek his beloved, he rides a rocking horse, while a diorama of the world moves past. His travels take him to Spain, where a sexy senorita ((Maite Cebrian-Abad) does her best to seduce him and on to Morocco, where Marie-Gaelle Communal treats him to a belly dancing exhibition. But it&#146;s no use so he trudges back home to find his true love at last. Hey, if the shoe fits…

(13050)
$4.18 (as of January 24, 2021 - More infoProduct prices and availability are accurate as of the date/time indicated and are subject to change. Any price and availability information displayed on [relevant Amazon Site(s), as applicable] at the time of purchase will apply to the purchase of this product.)

(232)
$7.49 (as of January 24, 2021 - More infoProduct prices and availability are accurate as of the date/time indicated and are subject to change. Any price and availability information displayed on [relevant Amazon Site(s), as applicable] at the time of purchase will apply to the purchase of this product.)

(9752)
$19.99 (as of January 24, 2021 - More infoProduct prices and availability are accurate as of the date/time indicated and are subject to change. Any price and availability information displayed on [relevant Amazon Site(s), as applicable] at the time of purchase will apply to the purchase of this product.)
related posts