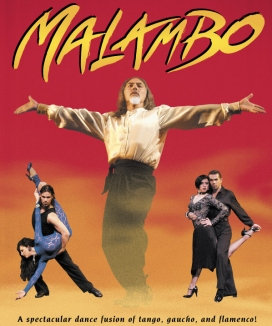 Luis Bravo has enlisted the choreographic talents of Oscar Araiz, the ballet director of the Colon Theatre of Buenos Aires, musical director Lisandro Adrover, and a company of 22 dancers and 9 musicians for an Argentine dance review, Malambo, which has had its world premiere in San Francisco. The program is a display of Argentine dance forms, notably the tango and the malambo, and their influences. Sexy costumes (by Argemira Affonso in the Bob Mackie style) that cling to the lithe female dancers and vivid lighting by Bravo enhance the proceedings.

The success of Forever Tango was due not only to the steamy excitement generated by the performance, but also to the fact that the dancers were mature individuals with whom the audience could identify. The passionate dances were performed with astonishing dexterity by men and women past their forties&#151;not the typical showbiz chorus types. In contrast, Malambo, with the exception of its two leading male dancers, is entirely populated by young performers. They are slick (several are truly excellent), but the majority of the audience will not imagine themselves in their places.

Bravo, who understands theatricality and the importance of entertaining an audience, has ambitions that this show does not fulfill. He has an anthropological, if not political, agenda that pits Europeans against the natives. He starts the show with a display of malambo, a competitive dance for men that is like the Spanish zapateado, a precursor of tap dancing. Originally from the Argentine pampas, Bravo would have us believe that this is truly a native dance form, which is dubious at best. The gauchos (cowboys) were a mixed lot and the dance has strong European roots. Then a tango is performed, followed by a number that is primarily flamenco in style.Bravo places a competitive dance in the middle of the first act in which the leading malambo dancer, Juan Saavedra, and the leading tango dancer, Carlos Gavito, vie for the attention of five women. It ends in a stalemate.

After two more traditional tango numbers (the standout couple of Oscar Mandagar�n and Carina Morrudo, and the excellent Carlos Vera and Laura Marcarie), there is a dance for people in native costume (one man&#146;s cloth belt had the word Uruguay in it) in which a chosen maiden was presented. The purpose was not clear, and the dance ended as a processional. The act was brought to a close by a dance entitled "Candombe," presumably reflecting that voodoo religion found in South America but having none of the theatricality of the Brazilian capoeira, which stems from candombe roots.

The second act presented a continuing mixture of styles, with a number entitled "Malambo" that was really about natives overcoming the Spanish (a flamenco group of a man and two women are out-danced and absorbed into the native group ). Later there is another confrontational dance called "La Pelea" (the fight) in which tangueros dressed in suits and spats on their shoes flash knives in a mild fight with gauchos who are unarmed.

The act ends with a grand showcase of all the dance styles presented (and many new costumes&#151;the show outdoes itself in the costume department), including the appearance of a barefoot blond woman dressed in periwinkle blue who does a balletic number. This was followed by an interesting curtain call in which the music director, Lisandro Adrover, took the last (and longest) bow. He had been evident throughout the evening, as the musicians share the stage with the other performers. Playing the lead bandoneon, his intense involvement with the music constantly drew attention to itself due to his noticeable facial expressions and his body language.

Bravo has a lot of work to do before this show can expect to achieve the success of Forever Tango. Too many extraneous elements (several numbers evoke the Don Juan archetype, complete with a disappearance into the flames of hell) keep the show from having a clear focus. Ultimately, it comes across as a geezer&#146;s fantasy, because the two leading male dancers are well-along in years, but their female counterparts are all flexible young things. The audience cannot identify with the stage performers as it did in Forever Tango and too many of the dances don&#146;t pack enough punch.