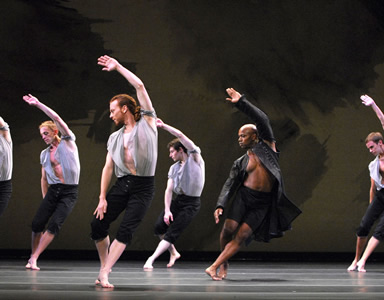 The man who brought us high art country-western line dances, a jokey Nutcracker, a drag Dido and Aeneas, and majestic, full-throttle versions of booming Handel masterpieces, has now moved into the territory of a different kind of musical genius–Mozart,. Mark Morris’ choice of three relatively mild-mannered works, ((the piano concertos No. 11 in F major (1783), No. 27 in B-flat major (1791) and the Sonata for Two Pianos in D major (1781)) as the basis for his new “Mozart Dances” indicates less a desire to revolutionize dance, than to explore, in a relatively predictable way, musical impulses of a deceptive simplicity. These are concertos for meditation, this is a melody-laden, almost translucent, musical voice. The dances are problematic.

In a Cal Performances engagement at UC Berkeley, September 20-23, things were gloriously presented, with Garrick Ohlsson and Yoko Nozaki at the piano and Jane Glover conducting the Berkeley Symphony Orchestra. What one discovers on the stage may resonate, however, depending on personal preference—the dance is, as usual, totally tied to the music. There were five entire pages of program notes (in a tiny type-face) presenting the history, context and significance of these Mozart pieces. Odd, then, that there was nothing at all about the choreography. ‘See for yourself’, Morris would probably say. Mozart, most likely, would have muttered something similar, given the chance.

Does Morris meet Mozart squarely? More or less. For all his domination of modern dance these days, it wasn’t that long ago when Morris’ style of modern dancing to music would have been laughed off a stage. To some, this practice is getting old. There are many other ways of illuminating music than the every-beat-has-a-quirky-gesture school of Morris-dance. If parallels are indeed intended to be established between the two men, perhaps Morris is worried that his career, his wild ride as the it-man of late 20th century dance, is about to crash and burn, just as Mozart’s did. Styles do change.

Maybe that’s why this piece seemed safe to the point of monotony. Mozart himself described his concertos as being “a happy medium between what is too easy and too difficult;… passages are written in such a way that the less learned cannot fail to be pleased, though without knowing why.” Same with the choreography. Morris’ sometimes magical, sometimes annoying mission to “visualize music” manifests itself here into male female differences, three sections with overlapping transitions, pretty dances to tinkly music. What’s missing is the same thing missing from Mozart’s commercialist homogeneity—surprise.

Dancing to music satisfies the primal instinct of an audience, but art, on stage or in the concert hall, should aspire to something greater than the satisfaction of urges. Morris’ work is beginning to look stale. No matter that the great majority of ticket buyers finds the work beautiful, lovely. What kind of risk is Morris taking here? What looks new?