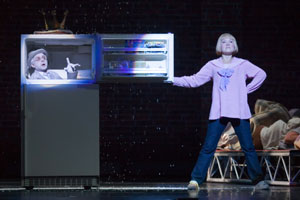 (Note: Arthur Lazere, the founder of this website, was a Mark Morris fan. It was fitting that the Mark Morris Dance Company would make its American Premiere of the dance-opera, ‘King Arthur’ in Berkeley, on the very day that Arthur Lazere died in a hospital a few miles away, in San Francisco. I’m sure he would have loved to hear the Purcell music and see what Mr. Morris was up to. Needless to say, Arthur Lazere will be greatly missed.)

In his day, Henry Purcell was a form-breaker. His ‘English Opera’ was a theatrical blend of spoken dialogue and music, not at all like the sung-through ‘Italian’ version of opera. His ‘King Arthur’ which debuted in 1691 using the text by John Dreyden, a leading poet of his day. In 2006, Morris has chosen to dispense with all narrative all together, to stick with the glorious music and charming lyrics, and create something unique – a dance/opera/vaudeville, what he calls, a ‘pageant’.

What a strange clash: the highly inventive costuming by Isaac Mizrahi puts things very much in a sort of post-punk London, while the music by the Philharmonia Baroque Orchestra (conducted by Jane Glover) and a fabulous cast of singers imported from the English National Opera (where the piece premiered to mixed-reviews last June) is strictly by-the-book. The scenic elements (Adriane Lobel) are of the bare-bones school, with folding chairs, hanging curtain sections, rolling platforms, even a refrigerator on wheels. What Morris does with the piece is create an homage (and satire) of things English within his customary style of music visualization. The result is an entertaining evening of humor, dancing and great music.

The news is not the dancing, which is pleasant enough but rather constricted by the scenic designs. Also, unlike previous works (‘Dido and Aeneas’, ‘L’Allegro’) where music was an opportunity to fill the stage with ravishing patterns and light, Morris invites the soloists onto the stage, where, despite the presence of anything particularly Arthurian, they get involved in the goings-on, complete with much gesturing of the arms. Oh, and the dancers get to stand stock still at various moments and sing, like Broadway choristers during a finale. The real chorus, played here by the UC Berkeley Chamber Chorus, creates some of the most gorgeous sounds of the evening– this is music made for reveling and bawdiness, just as Morris has presented it.