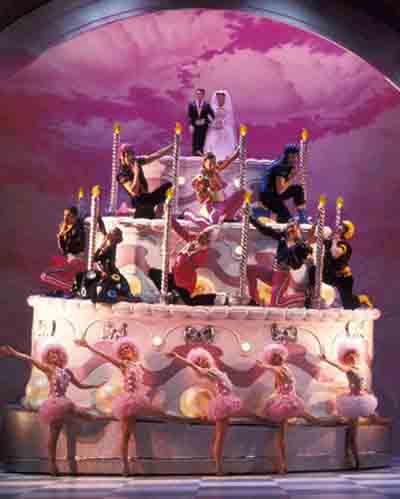 Anyone who ever danced around the living room to the strains of the "Waltz of the Flowers" might get a little angry at Matthew Bourne and his re-telling of the Nutcracker ballet. There&#146;s nothing wrong with messing around with the plot or the characters–this version takes place in a grimy London orphanage and looks absolutely Dickensian in its bleakness on Christmas Eve, only to go berserk in Act II, turning into a Technicolor movie-land fantasy. It&#146;s just that the choreographer is so lacking in musicality that Tchaikovsky&#146;s classic Christmas-time melodies get very little choreographic nourishment here. The music might as well not be there at all.

After a performance, audience members were heard to say that "there wasn&#146;t any dancing!" It&#146;s true, Bourne has little interest in choreography per se, the use of the human body to express emotions, the manipulation of space and time. No, he&#146;s more pragmatic and commercial than that&#151;to Bourne, it&#146;s all about telling a story, and wowing the audience with big, bright Broadway-style production values. It almost seemed shocking when one dancer, Michela Meazza, as Sugar, the siren who steals the hunky Nutcracker, struck an actual arabesque and showed a beautifully pointed foot, even without a shoe on. A second later she was back to her "role" as vamp.

The Matthew Bourne Nutcracker is the first version geared specifically to balletophobes. Bourne&#146;s conceit to set things in a Dickensian orphanage is not a bad idea, but the direction, which is probably a more appropriate word to use than choreography, has adults playing children in the first act, badly. The use of recorded music also starts things off in a disappointing mode.

Bourne, who won a couple of Tony awards and had a huge Broadway hit with a homoerotic Swan Lake inhabited by beefy, shirtless swans, called his original dance company, Adventures in Motion Pictures, and is clearly more influenced here by the movies than by Tchaikovsky, E.T.A. Hoffman or Lev Ivanov, the original composer, storyteller and choreographer, respectively. Once Clara, played sympathetically by Kerry Biggin, escapes a dismal Christmas Eve party at the orphanage into a dream, her world becomes a Pepto-Bismol-pink nightmare rather than a little girl&#146;s fantasy. This is a little girl who watches way too much TV at the orphanage and stays up late watching old movie musicals. Her dream jumps from a Sonja Henie-theme with a bunch of ice skating hoofers to a Busby Berkeley wedding cake ridden by lap-dancers.

In "Sweetieland," Clara chases her sexy Nutcracker, Alan Vincent, with the help of a couple of bumbling cupids, but he&#146;s an illusive guy. Vincent, who comes with the physique of a Chippendale&#146;s stripper and a clunky but never dancerly likeability, has already succumbed to the feminine wiles of another woman, Sugar, who is the stand-in for royalty in this production, although she never gets to wear a tiara. Clara seems hopelessly out of her league in comparison to the seductive power of Sugar, played with a streak of evil by Michela Meazza. To his credit, Bourne keeps the dramatic tension going where many productions are a series of ho-hum variations. Will Clara get her man? The audience is kept guessing, to the final few notes of the music.

Still, there&#146;s something a little depressing about this Nutcracker. Instead of magic, Bourne goes for belly-laughs. Without a toe-shoe in sight, a ballet that has inspired generations of little girls to head to ballet class is reduced to the kind of popular entertainment that might even bore children. The story, always a little sketchy, has actually been weakened by the designs of this production, because the international variations, with their clearly defined costumes and music, are now a muddle of pink confusion. Who, exactly are these women in Audrey Hepburn outfits (marshmallows) or motocross helmets (Gobstoppers), and why? Only the Spanish variation remains, although it has been recast as the Licorice Lady and her two consorts.

Mark Morris, whose own irreverent version of the Nutcracker played for several holiday seasons at Zellerbach before heading, this year, to a booking in London, played with the story as much as Bourne has. What the Morris Hard Nut offered, and what this production sorely lacks, however, was a deep, underlying respect and love for the beauty of the score, and for classical ballet. Bourne, as a choreographer, is all about characterization. He seems uninterested in spatial arrangements, technique, and, frankly, music. Certainly, we live in an age where movies dominate the arts, but as long as good, old-fashioned Nutcrackers are selling tickets, there is hope for the survival of ballet and dance as an art form. While Matthew Bourne tells a moderately engaging story, and fills a theatre with color and life, his contribution to the dance medium is somewhat despairing, like Christmas in an orphanage.