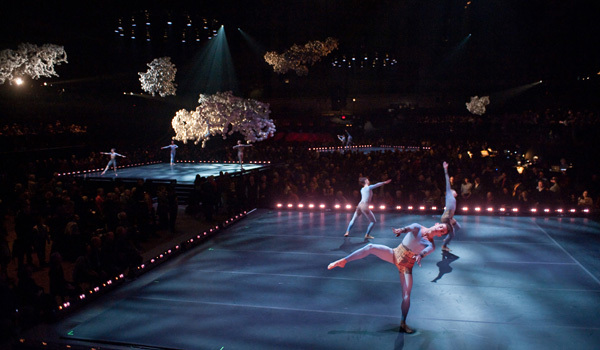 I first saw Merce Events in 1957 at Antioch College, Ohio. I had brought a small group of students up from the University of Kentucky, Lexington, where I was teaching dance, my first teaching job. Since we arrived a day early, I was able to visit with the company (then comprised of Carolyn Brown, Remy Charlip, Viola Farber, Bruce King, Marianne Preger and Merce.) I made salads with John Cage and ran errands.

The work was amazing and it has remained so ever since. Although I had trained with the usual early moderns (Graham, Limón, Weidman and several of the Duncan ladies), Merce’s work struck me immediately as innovative, energetic, challenging and delightful.

I started taking classes at the 14th Street Studio in New York. I attended every concert I could, through the bad years and the better years. When the company finally traveled to California, I sponsored Merce’s teaching at UC Berkeley and hosted its parties. One day I’ll write some stories about “Merce at My House.”

Until then, it is enough to report on the three evenings in New York City that brought the company to its final triumph. Oh that Merce might have seen the hundreds of people that poured into the Armory to devour the works on three stages and feel the enthusiasm. There were many years when audiences were few and response was poor. But at these 6:30 and 9 p.m. events in three nights, the MCDC performed excerpts from “Rune” (1959), “Crises” (1968), “Cross Currents” (1964), “Scramble” (1967), “Doubles” (1984), “Fabrications” (1987), “Ocean” (1994), “Way Station” (2001), “Nearly Ninety” (2009). These represent only some of the many works Merce choreographed in 50 years. What a treasure to remember, and hopefully, with appropriate skill, to see recreated by other groups.

My greatest appreciation goes to Robert Swinston, director of choreography, who joined MCDC in 1980 and since Merce’s death has kept the company in wonderful form and capable of performing his work. Throughout these two years of the Legacy Project (which took the company throughout the world), Swinston has taught, reconstructed works, guided and inspired excellence. He will continue teaching; how I wish he might find a group capable of continuing the repertory.

No company member should be excluded from kudos for these events, but more and more Silas Riener emerged as a solo star, his ferocious ability to move from stillness, off balance to startling flights, is startling. Jennifer Goggans’ stamina and quickness draws one’s total attention, as does Andrea Weber’s poise and detailed gesture. Rashaun Mitchell is another star: no matter how complex the combination of torso-head-limb movement, he is the master. There were endless duets, skillfully executed and always surprising. These included performances by Marcie Munnerlyn and Brandon Collwes, Jamie Scott and Dylan Crossman, as well as trios and group work by Emma Desjardins, John Hinrichs, Daniel Madoff, Krista Nelson, and Melissa Toogood. Such ensemble will be rarely seen again.

There has never been such a well-deserved triumphal exit from the dance world as was staged on these nights. Merce had a good time.