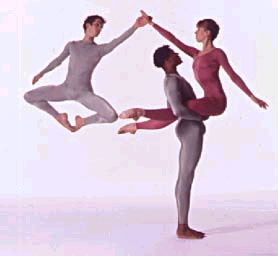 It was an odd sight, a line of panting Gen-Y modern dancers taking their bow at Zellerbach Auditorium, UC Berkeley, as, from the wings, a cane waved, followed by a very crippled, very old man. Merce Cunningham danced with Martha Graham in 1939, started his own company in 1953, and continues to revolutionize dance to this day. Cunningham&#146;s genius is evident in choreography that is, still and always, breathtakingly original. To his credit, it has never been easy to watch. Or listen to. His life&#146;s work has been to redefine what "dancing" is supposed to be.

The company presented four long pieces over two evenings, an opportunity to appreciate the range within the Cunningham opus, as well as the amazing ability of the dancers to recall hour upon hour of this incredibly complex choreography, and to perform it. If there was any doubt about the technical challenge involved, there was also the opportunity to see some of the younger dancers struggling to obtain the speed, line, lightness and balance required by the work.

Cunningham famously collaborated with experimental composer John Cage, (his life partner, who died in 1992) and other leading-edge artists to develop works that existed independently of any musical impulse. What music there is, often consists of earsplittingly loud electronic sounds, men walking around the theatre blowing on conch shells, or computer-generated noises. There is nothing to rest on, aurally, no rhythm, musical meter, nothing pretty or romantic. And then there is the movement: phrases that start and stop, patterns that begin and break apart, movement that is quirky and disjointed, long-held extensions and blindingly fast, complicated footwork and strange partnering. Cunningham always created with the use of chance (he would put together a dance with the roll of dice or use of the I Ching) and, for the last fifteen years, an additional tool, a computer program called "DanceForms," has been key in the development of material.

Ground Level Overlay (1995) featured music by Stuart Dempster, in which "10 trombone players descended 14 feet into the 186-foot-diameter cistern and spread out around the circumference". A huge textile sculpture by Leonardo Drew looked like hanging entrails upstage, and a cast of fourteen dancers began the barrage of walking patterns, quick arm gestures, lunges, and tilts. This was a "DanceForms" dance, and it looked it. The stage seemed at times like an aquarium at meal-time, with all the fish darting, circling, stirring up the water. Cunningham’s movement has often been jerky and mechanical-looking, but what made this piece look computer-generated was the seemingly impossible order of events on the dancers&#146; bodies, and their resulting struggle to accomplish the task. Here, human bodies never exchange weight in any gradual way, everything stops and goes; it&#146;s all a sequence of 0&#146;s and 1&#146;s.

Biped (1999) had the same technical assistance as the previous dance, but layered the effects through stagecraft. Upstage, there was no limiting curtain, just darkness, and dancers would appear and disappear, run in and out of this void. In front of the dance, projected on a scrim, video images by Paul Kaiser and Shelley Eshkar were actual "motion capture" representations of the dancers and choreography. These appeared occasionally, like recurring ghost visions, taking audience eyes for a ride.

Interscape (2000) was created with a musical choice: either John Cage&#146;s 108 and/or One. In Berkeley the latter, a solo for cello, was played by Loren Kiyoshi Dempster. The other option would have been an orchestra with 108 musicians. Interscape itself, with fourteen dancers and a photo mural by Robert Raushenberg, had its own encyclopedia of phrases, including some balletic vocabulary, hopping men in leprechaun-green unitards and spatial patterns that were as unpredictable as nature. Veteran company members Robert Swinston and Jeannie Steele presided over a batch of newer dancers as if to show them how it really should be done. There is some irony in watching a crop of new Cunningham dancers as the choreographer himself becomes, more and more, an elder. In this Gen-Y cast, the brains capable of processing this movement haven&#146;t necessarily been discovered on bodies that are as articulate and aesthetic as in years past. Time will tell.

Sounddance (1975) was an opportunity to witness Cunningham pre-computer. The piece itself is an aerobic marathon, with a pulsing, upbeat electronic score by David Tudor, and there was evident zest in the way the company dug-in and danced it. Group sections were more evident in this piece, as was simplicity. A central duet featured long, slow partnered lunges in which the man would wrap his hand around the woman, she would lift off and they would stay there for a few moments, a joined diagonal, a ray off the ground.