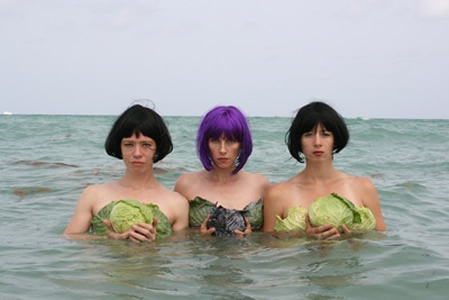 Over the years a number of choreographers and performance artists have looked to the disciplines of science as a point of departure for creative expression on the stage. Recently Liz Lerman explored the ethics of human genetics research in “Ferocious Beauty: Genome,” and last year the celebrated Bill T. Jones participated in the World Science Festival in New York. But these artists are only paying lip service to the intersection of aesthetics and scientific theory when compared to Michelle Ellsworth, who wore an electric dog collar on her right leg for recent performances of “The Objectification of Things” at D!verseWorks Art Space in Houston. If she made a factual error in one of her many monologues during the show, a “real” scientist in the audience gave her a mild electric shock using a remote device. Ellsworth explained this to viewers more than half-way into the evening, letting us know why she occasionally lurched and shouted in the middle of a sentence. It seemed like just a clever gag, until Ellsworth introduced the scientists seated in the fourth row during the post-performance Q&A session.

This was only one jaw-dropping aspect of a thrilling night of dance-theater from Ellsworth and her two young dancers Jessica Meeker and Erika Randall. The show might have a more exacting title; perhaps “The Objectification of Things: Hamburger,” since it focuses on the social history, science, and metaphors of a lowly hamburger, and also because it appears to be one manifestation of an ongoing series of ritual performances exploring the semantics of objects. That is, the meaning of things in communication and their potential for spiritual contemplation. In recent years, Ellsworth founded her own religion based on “service to objects,” the full details of which can be found at http://www.tifprabap.org/(The Institute for Potential Religious Artifacts, Beliefs, and Procedures). If you visit the website, you are opening Pandora’s Box, and after only a few clicks you will quickly discern the complexity of Ellsworth’s thinking. She is at once intelligent, disciplined, ironic, animated, and dramatic. The persona she has developed for the stage is both hilarious and seemingly over-aware. One episode in “Objectification’ involves chance combinations of five different dials (subject to “God’s will”) to elicit a “lecture.” Consequently there are 240 possible lectures, all of which Ellsworth is prepared to deliver on a given evening. On Friday, three materialized, on such topics as a “green” sex movement, the possible methane content of one of Hitler’s farts and its consequences in contemporary life, and other thorny matters related to blaming, denial, bargaining, torture, food, and sex.

The performance is framed as a ritual, skillfully integrating movement, live-feed video, film, music, theater, text, and even fine art (the women make plaster “resurrections” of the hamburger following its “death,” reminding viewers that it is a technique used by Michelangelo in the creation of the Sistine chapel). There is the adoration of the burger, its annihilation with blue substance-filled syringes, and ultimately its ascension in an Easter basket. At the finale, Ellsworth submits to burial with the hamburger corpse, a haunting yet hilarious moment. The intermittent songs, based in commercial pop forms, are extremely catchy. I left the theater humming to myself, “who am I… to guess the origins… of the carbon of the hamburger?” Perhaps the only thing missing is odor; for it is the thick blue carbon-filled smoke pouring out of a McDonald’s or Burger King that one finds so seductive. Throughout the performance the stage is organized symmetrically, always emphasizing the burger at its center as a kind of altar. At times Meeker and Randall strum on white guitars, creating a kind of Orphic escort into the underworld of the burger.

On Friday, the theatrical climax on came in a lengthy solo by Ellsworth, the other women surrounding her in unison phrases that evoked the overwrought poses of classic German and American modern dance, namely, Wigman, Humphrey, and Graham. Dancing emphatically all the while with a hamburger on her head, in her palms, circling round her neck or waist, or balanced in the arch of her foot, Ellsworth recited an extended apostrophe (from the Greek ἀποστροφή, apostrophé, or "turning away") an exclamatory figure of speech common in poetry. Used most often in situations of personification, it is familiar to the observer by its use of “O!”

“Gigolo! Gigolo!” Ellsworth began, continuing, “ I eat you while driving! …Token souvenir of my youthful passion! …How could I have known of your lipid pools? …Super-sizing my waxy cup! …Like a roach you return, laying your eggs in every corner of this post-industrial civilization! …Symbol of our decline!,” to quote only a few passages. This episode of apostrophe was punctuated by the burger moving “its little burger lips,” as Ellsworth explained, helping it along while playing the ventriloquist, repeating its mantra, “Don’t think! Don’t think!” This episode of apostrophe continued for more than fifteen minutes, making for a daunting paradox. “That was a little personal,” she explained at its conclusion, laughing to herself, suddenly breaking the wall between viewer and performer that she had just assembled, a kind of force-field to ensure her neurotic intimacy with the hamburger. Nearly twenty hours later, however, I’m still thinking, heeding Ellsworth, not the powerful and seductive burger.