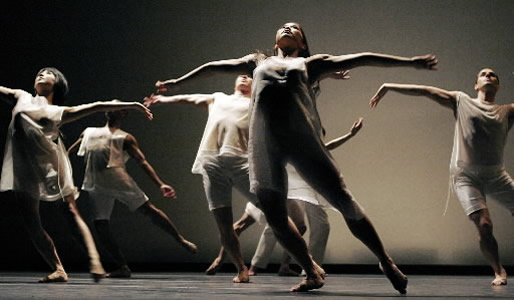 The last three contemporary dance performances I saw in Boston featured scores by Mozart. One supposes that if the presenters (respectively, Celebrity Series of Boston, CRASHarts, and Boston Ballet) had consulted with each other, they might have offered a mini-Mozart dance festival here in the city. It was, however, simply coincidental, but nonetheless auspicious. The chance to see choreography by Lar Lubovitch, Larry Keigwin, and Jiři Kylián, all of it set to highly familiar scores by Mozart, made me contemplate the intriguing juxtaposition of classical music and contemporary movement.

There are certain precedents in the choreographic world that might cause any established choreographer to desire tackling a score by Wolfgang Amadeus, at the least as a rigor of the profession. The first that comes to mind is George Balanchine’s Mozartiana, the masterpiece he made for the opening of the 1981 Tchaikovsky Festival at The New York City Ballet. But wait-why did that open a festival celebrating a 19th century composer? Because Balanchine used Tchaikovsky’s Suite No. 4, titled “Mozartiana,” (Op. 61), from 1887. However, it evokes the spirit of Mozart so skillfully that it remains, for me, the epitome of classicism, “neo” or otherwise, and the Mozartean ideal. In his most formal mode, Balanchine favored composers who favored Mozart, such as Igor Stravinsky, who admitted that he often “stole” from the classical composer. Balanchine used Mozart’s own Divertimento No. 15 for his extraordinary 1956 ballet of the same name, which Jennifer Dunning described in the New York Times as “…essentially about the good manners and vital graciousness of the world of Mozart’s music” (January 28, 1992). There are others by Balanchine, among them the lesser known Concierto de Mozart, which he made in 1942 for Argentina’s Ballet of the Teatro Colon, using Mozart’s “Violin Concerto No. 5.” Some other great examples from modern dance are Mark Morris’ evening-length Mozart Dances (to the “Piano Concerto No. 11,” “Sonata in D Major for 2 Pianos,” and the “Piano Concerto No. 27,” a lofty assortment) and certainly Twyla Tharp’s intricate Mozart Sonata K.545 from 1971.

When Lar Lubovitch Dance Company appeared at Boston University’s Tsai Center in December, the program opened with his celebrated Concerto Six Twenty-Two, a 1986 dance I had heard so much about, but which I had never had an opportunity to see. I wasn’t disappointed. The dancers wear gauzy white outfits that just slightly amplify the soft, elaborate choreography. The outer movements showcase Lubovitch’s talented dancers in a constant and skillful manipulation of the ensemble. Solos and duets emerge only briefly from the whole. Phrases repeat so that the viewer can see them from all sides, making it seem like the dancers are actually on a slow-moving turntable. Its abstraction is clear and evident, a nearly-perfect complement to Mozart’s balanced melodies and orchestration. The heart of the work is the second movement, a stunning pas de deux for two men, which evokes tenderness and spectacle, as the partnering is both intimate and daring. A year after it premiered at New York State Theater at Lincoln Center, it was featured at an AIDS benefit organized in part by Lubovitch. This second movement became “…widely regarded as the anthem for the AIDS era” (www.artistswithaids.org), though this connection seems doubtful to me twenty-one years later. Because a dance performed by two men has a haunting, plaintive quality doesn’t make it necessarily about the terminal illness of either one of them. On the contrary, the figurative aspects of this movement, I think, are what have caused it to endure. The other two recent works on the program, Jangle (set to some rhapsodies by Béla Bartók) and Dvořák Serenade, were far less impressive. They demonstrate rather that Lubovitch has settled into a comfortable formula of abstracting an ensemble, using “grand” classical scores, making it seem more or less as though he is just stealing from his earlier repertory. Clearly he was inspired by Mozart, but confined and unenthused by Bartók and Dvořák.

Keigwin + Company’s Elements, presented at The Institute of Contemporary Art in Boston in January, uses Mozart’s nearly exhausted “Piano Concerto No. 21 in C major” (known more recently as the Elvira Madigan concerto) along with music from Chopin, Philip Glass, Willie Nelson, Michael Gordon, Debussy, and many other composers. Lamentably it’s one big post-modern mess, and the irony is painfully forced. I had such hopes for Larry Keigwin after his performances a few years ago at the Zero Arrow Theatre in Cambridge. At that time he showed smaller, vigorous pieces that focused on the company’s natural identity: handsome gay men and stalwart straight women. Sometimes, they danced in their underpants or with a simple yet metaphorical prop, such as a mattress. That work embodied a sharp sexual opposition and tension, relying on movement for meaning rather than design or music.

Elements was made possible from a series of commissions Keigwin received over a period of time from numerous foundations and charitable trusts, and it appears to be an attempt at going mainstream and commanding more of a “family” audience. The Mozart concerto is only in the “Water” section that opens the evening. When the dancers arrived on stage wrapped in nothing but white towels, I was hopeful. At the least, it was a kind of droll joke that might refer to gay bathhouses or the peculiarities of public hygiene. One of the men walked carefully but confidently while wearing a pair of woman’s pumps. The dancers poured bottled water over each other. They pretended to be taking showers. Tentative laughter came from parts of the audience, but the humor soon dissipated, leaving me to wonder where the section would lead. Debra Cash’s program notes for “Fire” said it “…has the domesticated calm of a contained fireplace and a glimpse into the banked and flaring embers of a broken heart,” a poetic description, though I couldn’t find any evidence of those themes in the choreography itself, which was played to the audience in ridiculous costumes by Liz Prince. With their ribbons and zippers, they recalled rather a lower Las Vegas spectacle. In “Earth” the dancers mimicked lizards; enough said. For the “Air” finale they dragged carry-on luggage and dressed as flight attendants to Jim Webb’s “Up, Up, and Away.” Who told Keigwin to make his metaphors so obvious? Facile and overly literal, this long dance is hardly a feather in his cap. Keigwin is veering toward the Momix/Pilobolus paradigm, where modernity meets commercialism, satisfying audiences full of indifferent parents and their giggling kids.

Boston Ballet’s expert staging of Kylián’s Black and White in February at the Wang Theatre reminded me of a simple truth: Mozart is not background music, and in the wrong hands it is capable of dominating the choreography. The Czech master’s setting of two Mozart concerti (the A major and once again, the “Elvira Madigan”) in his Petite Mort and the “Six German Dances, KV 571” in his Sechs Tänze are dazzling episodes of subtlety and sophisticated jesting. What is so intriguing about them, especially within the realm of ballet, is that Kylián’s approach to the master is so uniquely original, so entirely different than that of Balanchine. Where the latter is inspired to make counterpoint and balance, the former finds introspection, asymmetry, and wit. The Sechs Tänze offer strange illusions that would never have found their way into one of Balanchine’s “Mozart” ballets. As the scenes in the finale of Black and White progress, the white powder from the wigs fills the air, leaving a trail that describes the trajectory of each dancer, a magnificent touch. A female giant, performed by one man sitting on the shoulders of a second, invisible other, crosses the stage with a green apple skewered on a sword foil, triumphant. Without hesitating, she holds the apple in her teeth and pulls the sword out with a flourish. Oh, the provocation! The archetypes!

While watching with wonderment, I pondered whether or not Keigwin could ever make a dance as powerful as even the lesser works of Lubovitch or Kylián. And then I wondered if such a goal is even reasonable to expect. For the ideal of originality, the ability to develop a distinctive movement vocabulary over several decades, the shock of authentic iconoclasm, very much seems bound to the modern period more than the early 21st century. As the latter progresses, I’ll be watching with fascination to see how the younger generation of choreographers takes on Mr. Wolfgang.