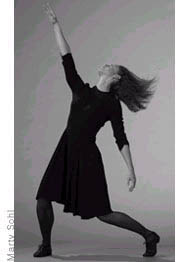 Abstraction is a funny thing. It’s instinctive to search for meaning, whether it is visual, narrative or musical. Modern artists, on the other hand, often demand that these lowbrow impulses be set aside, that the desire to understand be suspended, that the slate be blank and open to something totally new. That is an admirable mission, and yet, expectations are raised and meaning implied by things as tangential as poster art, titles, and program notes.

Nancy Karp&#146;s 24th Anniversary Concert at the Cowell Theatre, San Francisco, was a case in point. Her purely abstract dances were fluid, workmanlike compositions, but her program announced a more thematic presentation: La Traversa inspired by Sicilian culture, and Kalasam, suggested by the dance of the Kerala state in South India. The marketing implied the exotic–villages in Sicily and Southern India, places Karp spent substantial amounts of time living and working in over the last few years. But the audience was offered a starker, more academic world view–a modern dance experience.

Imagine Sicily without emotion, India without tablas. The highly detailed program notes speak of all the inspiration behind the purely abstract dances, but that&#146;s like a sex partner who articulates fantasies during the act. Better to just do it. Especially when the fantasy world so little resembles the actual.

In La Traversa, the dancers wore the kind of suits and black dresses you might find on old men and women of the Sicilian villages from which Karp drew inspiration. The dancing, however, was as American as modern dance&#151;phrases suggested by one dancer, picked-up by another, and then seen in various permutations and dynamics, moved through space, added-to, developed. This did little to suggest, "a lone figure on a steep street at midday, an afternoon funeral procession, a bar fight spilling onto a square," aspromptedby the program notes. The contest becamewhether anything suggested by the Sicilian theme could be picked-up in the dance.

The music, by Alvin Curran, performed live on accordion, trombone and violin, suggested an Italian funeral band deconstructed. Here again, the style of rhythmless, austere modernism triumphed over any quaint oom-pah-pah&#146;s or dreamy accordion melodies. What accompanied the dance was, as Curran described it, "cryptic phrases," "waves of…textures, velocities and densities."

Curran&#146;s Gertrude Stein-like program notes could well describe Karp&#146;s dance.."ever so lightly in a…simplicity or ironic almost cabaret little march, or a structured improv which crunches all the melodic fragments together in a fast-paced jam, like interchangeable past and future memories."

Kalasam, named after a pattern of dance steps in the Kathakali tradition of Southern India, offered a similar approach to this abstract travelogue: no apparent India, but paragraphs of description, an electronic soundscore by Paul Dresher featuring a "marimba lumina" and slide projections that offered architectural details. Along with the wash of blazing sun or moody monsoon-colors on the stage, and the movement, which built to a crowded frenzy, here, at least, there was a suggestion of real-world ambience.

In Kalasam, the dancers seemed to tear into movement phrases as if imbued with their own private meaning. There was a welcome kinesthetic charge once the full company took the stage. These sections were as exciting as the earlier duets and spatial patterning in this piece were interesting. And, finally, there was an opportunity for an &#145;ah ha&#146;…a sense that thischoreographic density and intensitymight representlife in India.

Nancy Karp has waved the flag of abstraction for two-and-a-half decades in San Francisco, winning awards and traveling the world with her dance company. What she seems to have discovered most recently, however, is that representational art sells tickets. Judging, for example, fromthe expression on the face of onesari-clad audience member who walked out of the concert looking confused, it&#146;s probably not a good long-term strategy. Karp&#146;s movement vocabulary offers a travelogue of the human body. That&#146;s enough. Her choreographer&#146;s literal sources are perhaps better left a secret. As it is, the audience is not transported by the dance, but left, instead, wondering at the immense distance between inspiration and reality.