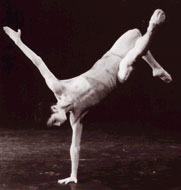 Jiri Kylian, director of the Nederlands Dans Theater since 1975 (he recently stepped down to focus on choreography), has created over 50 dances for the company. The works in these Cal Performances programs ranged from the dazzlingly lyrical to the severely minimal. In general, Kylian&#146;s style of modern dance looks like ballet that has been freed from classical technique. The NDT dancers are sleek and quick and funny, and they reject American-style modern dance muscularity in order to offer a more European chic.

Nothing thrilled as much as Symphony of Psalms, the oldest piece on display (1978). Here, the emphasis on space-eating choreography, rushing, swirling group dynamics and athletic partnering, created a tangible excitement. Symphony of Psalms, with eight couples (the women in gorgeously old-fashioned Graham-style dresses that danced on their own with every leg movement and jump) featured the eponymous music by Stravinsky for symphony and chorus that was darkness and light adding-up to create splendor.

Where Balanchine took ballet technique and created fantasies of steps and patterns, Kylian began his career in a more theatrical vein, creating grand gestures rather than little steps, always filling huge spaces with masses of bodies, adding more costumes, more drama, more emotion. While Balanchine was stripping away all the romantic excesses of classical ballet, Kylian was making modern dance the kind of operatic spectacle that could only have happened in Europe, land of state-supported dance companies and huge, old theatres. While a genius in a world of his own making, Balanchine&#146;s works always draw one into the technique of the dances. To him, small touches were all-important, and simplicity spoke to the 20th Century.

Kylian, on the other hand, is all about excess. Beautiful, thrilling, dramatic excess. The choreographer&#146;s latest work, however, shows a vision that has been flattened by history, a more austere, bleaker use of dance, a choreography that has grown more and more static, as if the dancer, unable to create on his own body, as he has aged, has moved into different interests. Claude Pascal (2002) featured a three-act dada-style play delivered by lip-synching puppet-like actors. Dressed in 19th century costumes, they emerge from behind a mirrored wall with doors, only to be replaced by dancers in partial undress, who appeared to represent some release of the psyches represented. Full of stiff, mannered, comical ways, the piece is entertaining, and annoying, like a danced Waiting for Godot. ("I love solitude…spaghetti.") Kylian&#146;s pedestrian explorations yield theoretical bounty but not much kinesthetic enjoyment.

In the same vein, but taken to an even greater extreme, was the recent piece, Last Touch(2003), which was a stage setting of a Victorian-era drawing room with actors, a droning musical score, and movement that made mime look like speed-skating. In the course of half an hour, the performers took stage action that could have transpired in 30 seconds and slowed-it into a Butoh journey where the opening of a mouth or turning of a head offered the payoff that, ten years ago, Kylian might have used 24 dancers rushing around the stage for. A sudden explosion brings everything to a shocking stop, and the ending is merely a reset, the performers returning to the positions (seated in a chair, playing cards, looking out a window) where they began. Again, interesting theatrically, choreographically depressed. This is the world we live in.