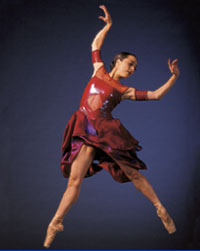 Oakland Ballet seems to be getting right to the pointe these days. With new office and rehearsal space in Oakland and an upcoming first-ever performance at Yerba Buena Center in San Francisco, the 37-year-old troupe is flying high. The opening program this weekend at the Paramount in Oakland even featured a rarity, a Balanchine ballet in honor of the great Russian dance master&#146;s centennial year. This is an honor not often accorded to dance companies by those who dole out Mr. B&#146;s choreographic legacy. Unfortunately it was the least successfully realized offering on the bill.

Glinka Pas de Trois is not exactly Balanchine&#146;s masterpiece to begin with–a little white ballet, of the kind used to open the bill in more traditional times. Marina Eglevsky, daughter of the great Andre Eglevsky, who with Melissa Hayden and Allegra Kent, premiered the work in 1955, staged it for Oakland. To say that guest artist Maximo Califano is no Andre Eglevsky is an understatement. Not quite up to the demands of the choreography, he was stiff and awkward and didn&#146;t manage much elevation until his final variation. The women, Jenna Johnson and Erin Yarborough, were blonde and lovely in the Balanchine mold and held up their end as best as they could under the circumstances.

But there was much more good news than bad. The company shines in contemporary works, many created on them. Such was Michael Lowe&#146;s Double Happiness, a charming Asian reverie that conferred the happiness of its title on those who watched. With a lively score by Melody of China, it began with a flirtatious pas de deux for Chih-Ting Shih and Gabriel Williams as "Gold Rush Folk." Amid much business with fans and Western hats –kitschy but cute–this segment gave way to a pas de quatre for horses with Yarborough and Ethan White as palominos and Joseph Copley and Carlos Venturo as two intensely athletic dark horses. The corps enters and does a dance of "Splashing Fish" and the piece ends with a wedding banquet, the whole company celebrating as the horse and Gold Rush couples, now clad in red nuptial robes, tie the knot. Lowe, an Oakland native who claims to have received his inspiration from childhood visits to Chinatown, can be proud of what his local company did with this world premiere.

The highlight of the evening, choreographically and emotionally, was Francesca Harper&#146;s Dark Light. Done as a response to 9/11 and premiered in Oakland a month after that event, it originally was a solo dance. Reworked and presented two years later to mark the anniversary, it has been expanded to a dance for seven. The dancers begin by walking onstage and talking, sometimes overlapping each other, about war and fear and security. Then they begin to dance to Rolf Ellmer&#146;s jazzy score. Harper&#146;s dance vocabulary is original and quirky, always interesting to watch. The dance movements eventually begin to suggest fear and flight and then, as all the dancers fall down in a line, one undoes her long hair and begins to mourn in witness to tragedy as the word "HUMAN" is projected on a screen at the rear. Powerful stuff.

The final offering was a real crowd-pleaser, Robert Garland&#146;s Joplin Dances, first premiered at the Brooklyn Academy of Music in 1995. With pianists David Thomas Roberts and Frank French manning the keyboards of an enormous double piano, the company cakewalked and cavorted to irrepressible ragtime tunes. Kate M. Leiberth and Williams delivered "Jumpin&#146; De Broom" a marriage ritual, while Phaedra Jarret and Jakee Malik Johnson proved you can&#146;t judge a book by its cover in the flirtatious "Book Dance." From there, the ensemble took over, with leggy Ilana Goldman a standout in "Ragtime Nightingale" and the closing "Maple Leaf Rag."