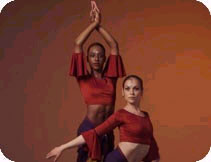 Oakland to San Francisco is actually a long way, if you&#146;re a regional dance company. Karen Brown, former Dance Theater of Harlem prima ballerina, became the first black woman in America to run a ballet company when she got the job at Oakland Ballet in 2000. The company&#146;s arrival at San Francisco’s Yerba Buena Center for the Arts four years later is a significant event for her and for the company.

The group made a name for itself in previous times for its historically accurate recreations of famous "lost" ballets, but hadn&#146;t performed in San Francisco for 25 years. Brown seems more concerned with the present. Struggling both to keep the company afloat in tough economic times and to create an artistic statement of her own, she has her work cut out for her.

Brown&#146;s calling card–her choice of repertory–is interestingly diverse and shows the dancers to generally good advantage. It&#146;s great to see dances by some of the strongest voices in the local modern dance scene represented here. The company adds strength, line, and physical commitment to these works. It&#146;s clear they&#146;ve been influenced by direct contact with each individual choreographer and they tell each story differently.

Brown&#146;s wisdom pushes these dancers and this company in the direction that reality offers it: if you can&#146;t afford to compete with the San Francisco Ballet, don&#146;t. What weaknesses there may be in classical technique are disguised by the mainly contemporary repertoire. In fact, taken as a modern dance company, the group looks as strong, expressive and beautiful as the Mark Morris Dance Group or any other modern company of the highest regard. Brown’s instincts are good.

Margaret Jenkins&#146; 1991 piece, "Sightings," opened looking pedestrian and predictable, but then kept opening, in wave after wave of mellow but clearly etched themes and variations. The line between everyday and virtuosic movement was always changing, catching you off-guard, and Jenkins&#146; thematic anchors were sudden unisons&#151;the thrown, reaching group sections that lasted for a few seconds before another lyrical chaos would take over. It was often as busy movement-wise, as a city street, randomly fascinating at any given moment on any given day. With 13 dancers dressed in unisex skirted pajama outfits by Sandra Woodall, the group filled the stage with color and confidence, and with their relaxed, grounded dancing, they seemed to be staking a permanent place in San Francisco.

"Huapango" is a 1958 work by Gloria Contreras, a student of Balanchine who added Mexican flavors to her neo-classical ballet. The cast of five (Jekyns Pelaez, the single male, along with Alexis Drabek, Ilana Goldman, Jenna Johnson and Cynthia Sheppard) were costumed in toe shoes and unitards, and stayed in their classical form, with only an occasional gesture or two possibly intended to be Latin. The music, a bland amalgam of Mexican stylings without the Latin rhythms, created expectations that were never fulfilled. This ballet exposed the other side of the company&#151;there&#146;s no hiding in toe shoes and unitards. Contreras&#146; text-book series of steps could either be done well, with sparkling technique, or not. Jekyns Pelaez looked strong throughout, in partnering and individual moments, but the women were less unified, several smiling and secure, another off her leg, never finding center, hurling herself through the motions.

&#145;Lone Woman" a solo by Robert Moses, was really a duet between dancer and text, as the music by Recoil featured a provocative monologue. The recorded text had an edgy, techno poetry-slam quality to it with such signal phrases as "Every woman has an itch", and "let the hitting begin." The female voice seemed to control the female dancer, who was confined to a trash-circled pool of light and a bench. That sex and desire seem to be an odds with the woman&#146;s upbringing was developed by Moses in choreography that looked more like tortured character development. It was dancer Jenna Johnson&#146;s acting ability that brought the piece off. With the omni-present voice, as annoying and insistent as the lack of movement for the dancer, the piece moved from the verge of softporn/stripclub eroticism into something more personal, like insanity. Moses created a flashdance of conflicts, a portrait of a real woman, not some glorified ballerina.

Robert Henry Johnson, another local prodigy, a gifted dancer and choreographer who goes in and out of having a dance company, gets a budget here, and the chance to have some fun with a big batch of fun-loving dancers. His version of ballet is placement and pointed feet but nothing pure. "La Femme Au Puits: Thirsting" looked like a colorful costume party–an Act II of the Nutcracker with rubber tutus, Indian saris and Alice-in-Wonderland hats. The world music soundtrack by Zap Mama and Shaka Gonzales was, at the heart of the piece, all kinds of fun. It was only on reading the program notes that "La Femmes Au Puits: Thirsting" revealed its roots in a Bible story, "The Woman at the Well."

Fortunately, Johnson stayed clear of dogma, and any story ballet conventions whatsoever. He has a real knack for creating theatrical movements and interesting stage patterns, and his constant cross-pollination of dance genres looked natural, like different notes of the same song. There was one strange transition, however, one moment when the French-themed spoof suddenly switched continents and became a kind of Bollywood production number. This was clearly dictated by the music choice, but the jump in musical as well as movement styles (down to the costuming) stretched the boundaries of narrative logic a little thin. Much of the pleasure of the piece, however, was the always inventive choreography as well as strong performances by many of the dancers. Bernard Gaddis, with an amazingly sculpted torso on display, not only got extremely sweaty as the "Water of Life," but blazed around the stage, a full-out force of nature.

In this piece, as well as the Margaret Jenkins modern dance piece that opened the concert, the decision by Brown to funnel resources to contemporary, locally-produced projects shows how Oakland Ballet can set an example&#151;with a national outlook and a local talent base, they have something different to say than a touring group. Oakland Ballet, under Karen Brown&#146;s leadership, still has its Nutcracker, but she is connecting to a new vibe. You might call it "city ballet." They&#146;re lucky to have it in Oakland, and they&#146;re lucky, now, to have it in San Francisco, too.